The Bussa Rebellion was the largest slave revolt in the history of Barbados. The rebellion took its name from the African-born slave, Bussa, who led the uprising. The Bussa Rebellion was the first of the three major slave uprisings that took place in the British West Indies between the U.S. abolition of the slave trade in 1807 and general emancipation by the British in 1838. The two other rebellions occurred in the Crown colony of Demerara-Essequibo (now part of Guyana) in 1823, and Jamaica in 1831.

Enslaved people began planning the revolt after the Barbadian House of Assembly discussed and rejected the Imperial Registry Bill in November 1815, which called for the registration of colonial slaves. Believing this registration would make their lives more difficult, enslaved people began to secretly meet in February to plan the uprising in April. 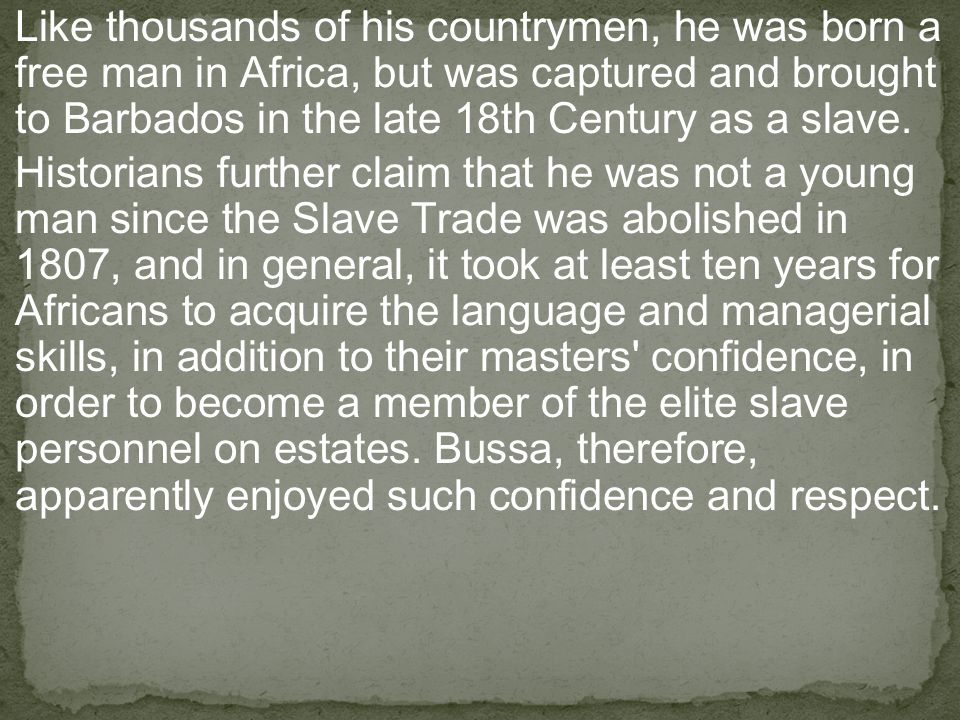 The organization and leadership of the rebellion evolved on a number of sugar cane plantations, with each estate choosing its insurrection leader. The Simmons Plantation, one of the largest on the island, had three leaders: John Grigg, Nanny Grigg, and an enslaved person known only as Jackie. The Bailey Plantation uprising was led by four enslaved people: King Wiltshire, Dick Bailey, and enslaved men, Johnny and Bussa. The revolt was named after Bussa. The planning and organization of the rebellion was accompanied by a propaganda campaign orchestrated by three free literate black men: Cain Davis, Roach, and Richard Sarjeant. Davis held meetings with slaves from different coastal plantations where he coordinated the rebellion plans and shared rumors. Sarjeant played a similar role, mobilizing rebels in the central parishes. The final day of planning took place at the River Plantation on Good Friday night April 12, 1816.

The rebellion started on Easter Sunday night April 14, 1816. It broke out with cane fields being burned in St. Philip parish, signaling to other rebels in the central and southern parishes that the rebellion had begun. It quickly spread from St. Philip to neighboring parishes which also experienced cane field burning’s, but as yet the local militia had not confronted the rebels.  In the first days of the rebellion, over seventy estates were affected, forcing white owners and overseers to flee to Bridgetown, the colonial capital, in panic. Despite the scope of the rebellion, only two whites were reported killed.

The rebellion was short-lived. Martial law was declared on April 15, 1816. It was suppressed by local militia and British imperial troops which ironically included slave soldiers. The governor of Barbados, Sir James Leith, reported that by September, five months after the rebellion ended, 144 people had been executed. Seventy people were later sentenced to death while 170 were deported to neighboring British colonies in the Caribbean. Alleged rebels were also subject to floggings during the entire eighty days of martial law.

Slave uprisings and rebellions laid the foundation for the emancipation of African slaves from their colonial masters.

For the eve of emancipation day, the African Heritage Foundation (AHF) has conceptualized “1816”. “1816” is an art installation being created by members of the AHF that will depict a slave uprising on a plantation. This installation will be on display from the 31st July, at the headquarters of the AHF located on “Two Mile Hill, St. Michael”. It will be opened at 6pm. No entrance fee will be charged, but should you feel like making a contribution to the AHF you are welcome to do so.

The draw for winners of the “Emancipation Day Challenge” and presentation of prizes will also take place that evening at 7pm.

The evening journeying into night will be filled with African inspired music from around the world. Food and drink will be on sale along with African and locally made jewelry and garments.

You are encouraged to bring the children and have a fun evening of games. Have them enter the Hulla Hoop and skipping challenges.

6pm until everyone is gone. The next day is a holiday. I will be seeing you soon.

Emancipation Day Challenge. Forms can be collected at AHF headquarters or downloaded by clicking link provided.

Tomorrow night (21st July – 9pm – 2am) the AHF celebrates and recognizes the birth of a great African hero His Imperial Majesty Haile Selassie 1st. It will be celebrated with the music created by those who pay constant homage and honour to this man. King of Kings and Lord of Lords. Conquering Lion from the tribe of Judah. Elect of himself and light of the world. The might and power of the trinity. Ras Tafari.