Christmas in Ethiopia is called Ganna (or Genna/Gena) and is celebrated on January 7th. 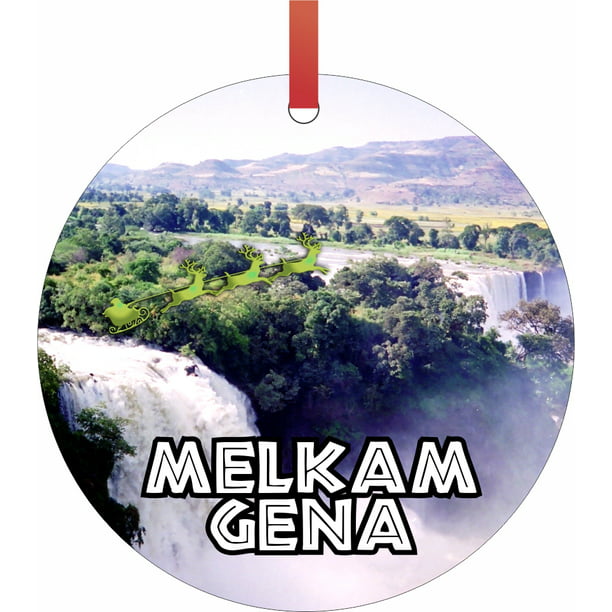 Ganna comes 12 days before the Timkat festival, another important holiday. Genna (also known as Lidet, or “birthday”), does not hold as prominent a place on the Ethiopian calendar as it does in other parts of the world. Easter (Fasika) reigns as the preeminent Christian holiday, but Genna nonetheless remains a major religious and cultural event throughout the country. 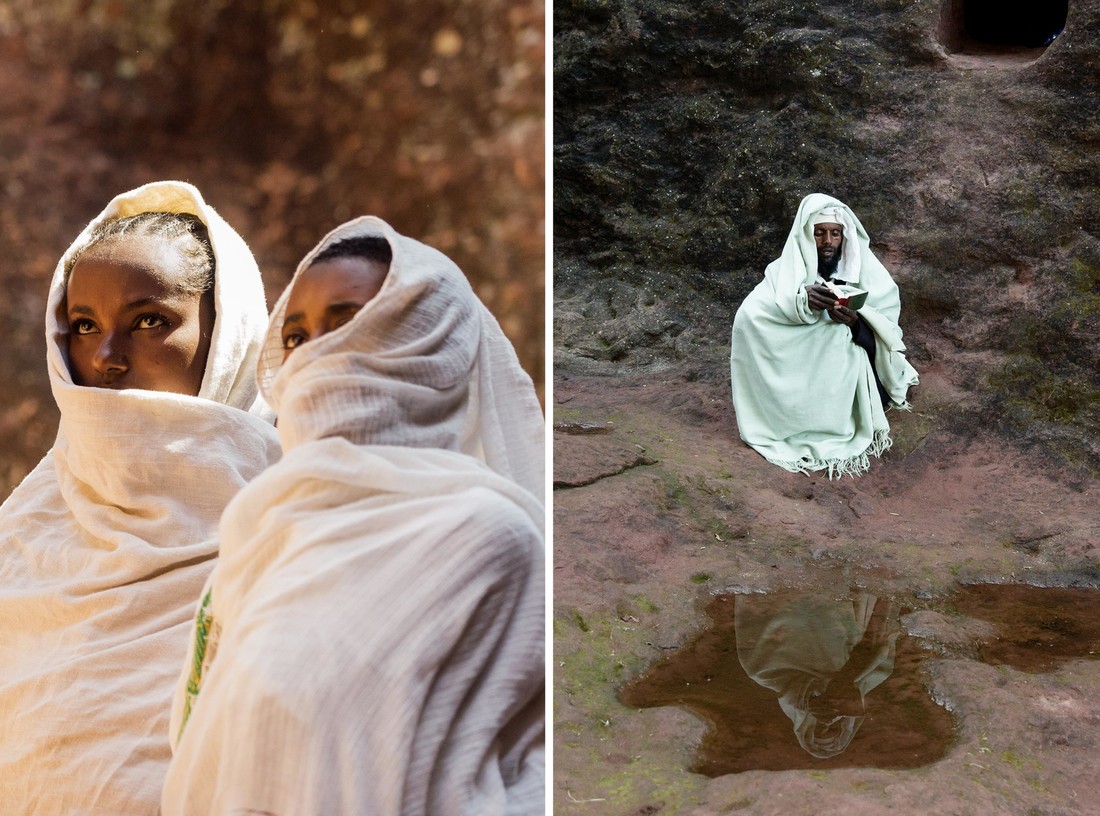 The main ceremonial activities of the holiday center around local Ethiopian Orthodox churches, which hold late-night services on Christmas Eve lasting well past midnight. Traditional liturgical singing marks these services, as does chanting performed by priests and deacons wearing colorful robes with gold and silver accents. Many people travel by foot from church to church, taking in various services until the light of dawn announces the arrival of Christmas morning. 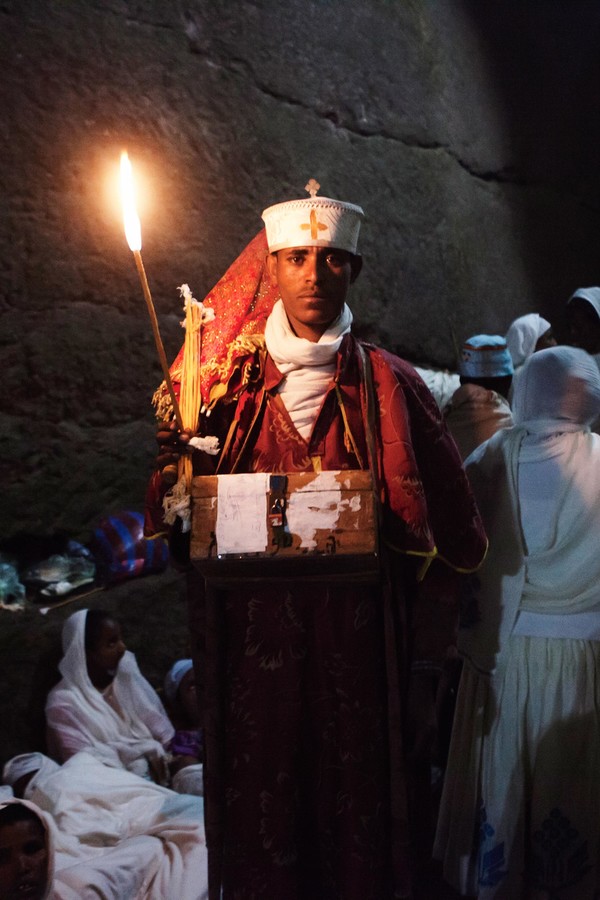 A priest hands out candles to those celebrating Genna among the the rock-hewn churches of Lalibela. The town draws tens of thousands of pilgrims for Genna, many of whom will sleep among the stars following late-night Christmas Eve services.

The first Christmas meal is often an early breakfast. The light meal likely starts with juice made from flaxseed (to oil up the intestines after 40 days of fasting) before moving on to the famously spicy chicken stew doro wot, and strong Ethiopian coffee to help welcome the new day. Later on, friends and relatives gather to enjoy a full Genna feast, usually involving a freshly killed lamb for mutton tibs and traditional beverages such as tej (honey wine). And though gift-giving does not figure very prominently in the Ethiopian Christmas tradition, the purchase of new clothing for the occasion, particularly for children, is seen as an important part of the festivities. Several hundred families walking toward churches dressed as a sea of brilliant white cotton is a common sight throughout the country. 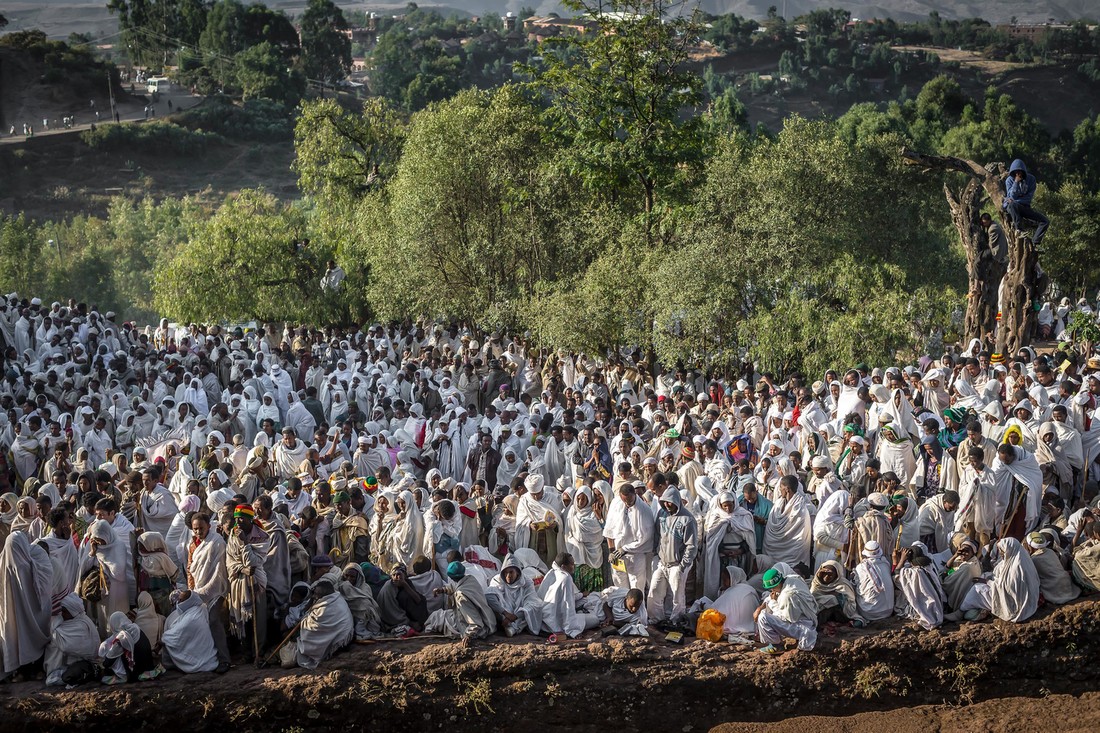 Perhaps the most unique aspect of the Ethiopian Christmas tradition is that it is associated with a sport, also called Genna, that is most widely played during the holiday season. According to Ethiopian legend, when the shepherds of the biblical Christmas story were informed of the birth of the Messiah, they expressed their overwhelming joy by using their staffs to break into a spontaneous game that resembles field hockey. The afternoon of Genna is filled with matches of the game, played mainly by young men, and potentially other sporting activities such as horse racing.

Although Genna is observed by Christians across Ethiopia, the most famous Christmas celebrations arguably occur in the historic city of Lalibela. There, crowds of up to 100,000 pilgrims flock to watch immaculately dressed Orthodox clergy perform the woreb lining the steep ledges surrounding the famous rock-hewn churches, carved over 800 years ago. Accompanied by a slowly building tempo of traditional church drums, metallic sistrum and pilgrims’ clapping, they lead the crowd in an intensely moving musical performance about the birth of Jesus Christ. For though its execution may look different here than in other parts of the world, the focus of Ethiopian Christmas remains the same: to celebrate the birth of a Savior who came to take away the sins of the world, and to bring peace to all mankind. 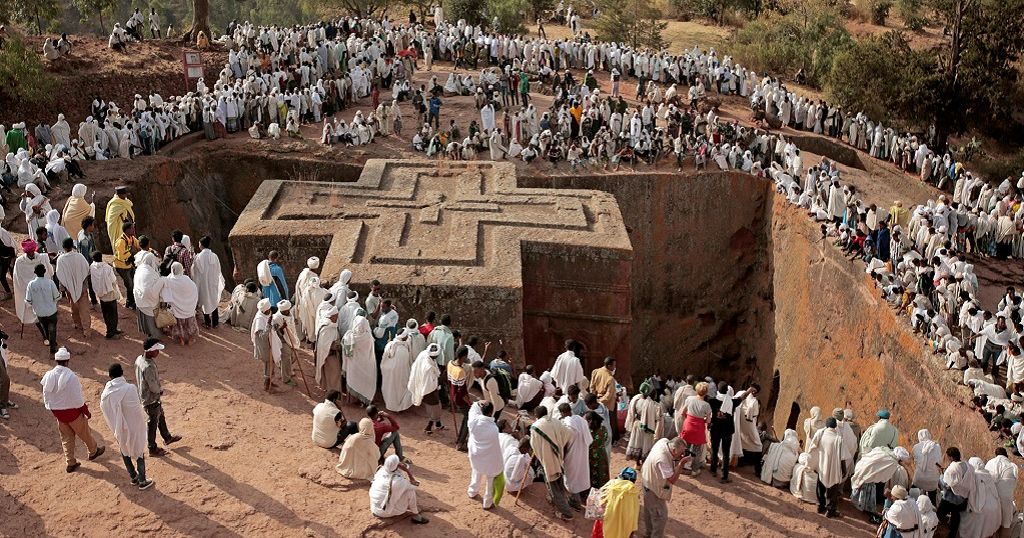 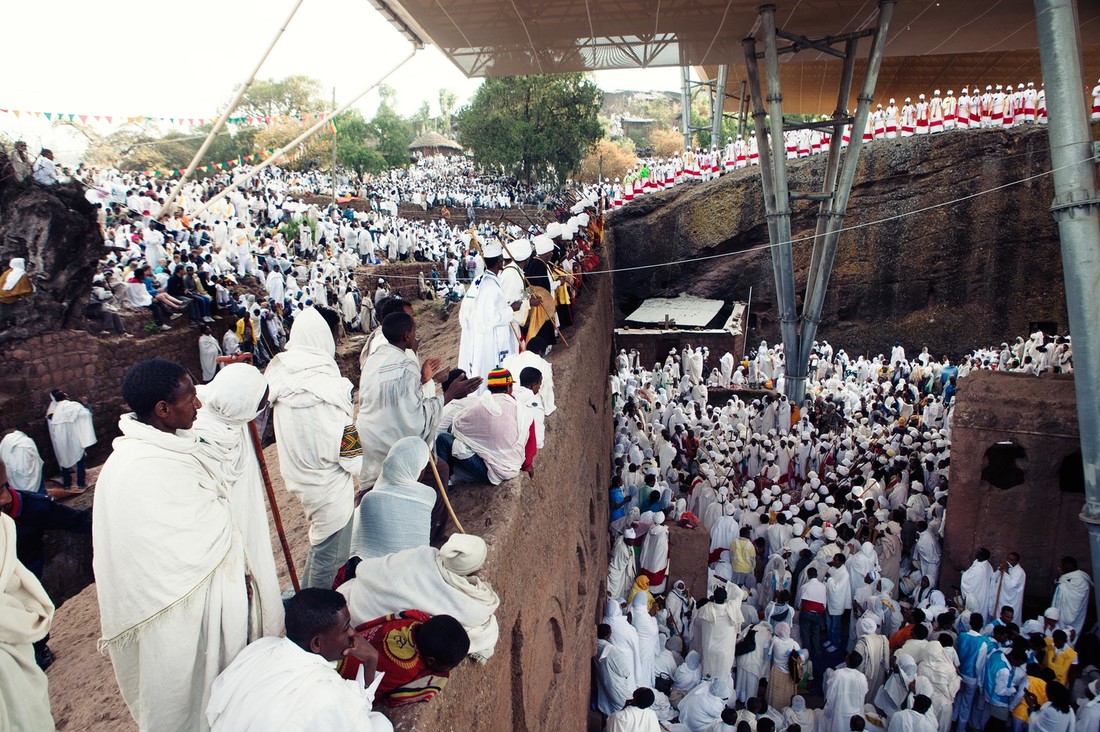 Pilgrims flock to Lalibela’s sacred Saint Miriam church while priests line the steep walls for a ceremony on Christmas morning. 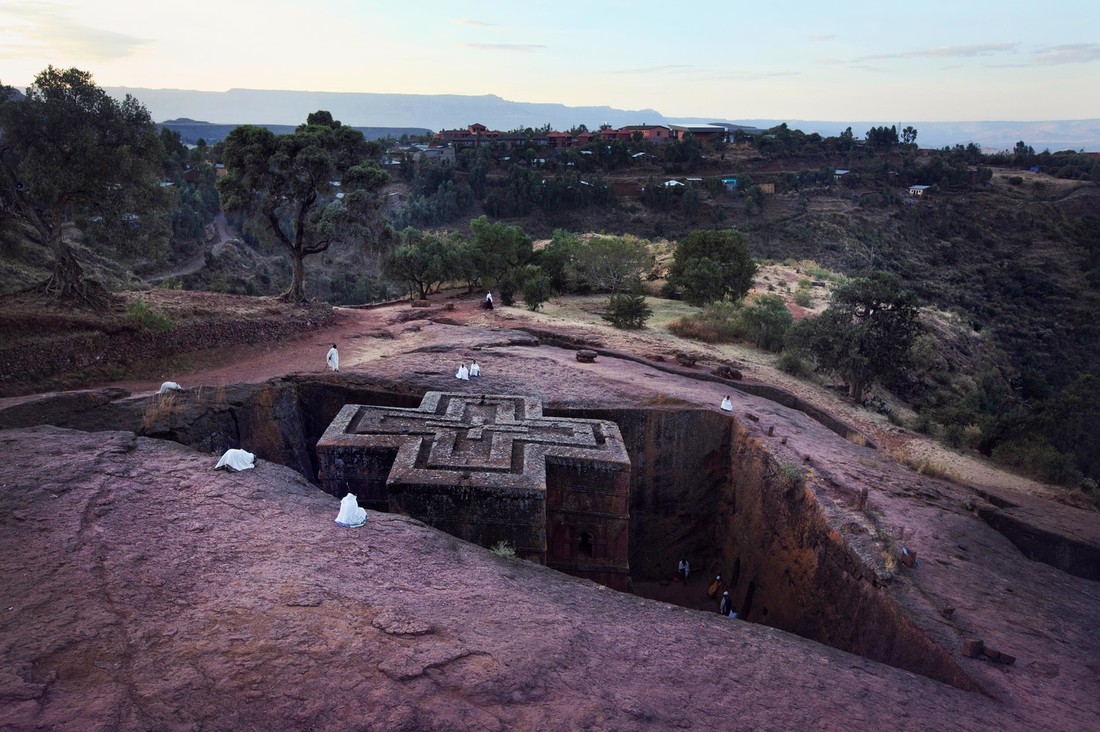 Pilgrims linger at Lalibela’s famed Saint Giorgis rock church after many others have returned home to feast. The town’s 11 rock-hewn churches are said to have been carved with the help of angels over 800 years ago.

From the African Heritage Foundation family to your family, we wish you all a Happy Ethiopian Christmas: Melkam Gena! Or: “Enkwan le Gena be’al betena, beselamna, bedesta aderesachu!” (“Have a wonderful Gena with health, peace and happiness!”)