The day after the United Nations voted to recognize the People’s Republic of China, then–California Governor Ronald Reagan phoned President Richard Nixon at the White House and vented his frustration at the delegates who had sided against the United States. “Last night, I tell you, to watch that thing on television as I did,” Reagan said. “Yeah,” Nixon interjected. Reagan forged ahead with his complaint: “To see those, those monkeys from those African countries—damn them, they’re still uncomfortable wearing shoes!” Nixon gave a huge laugh. 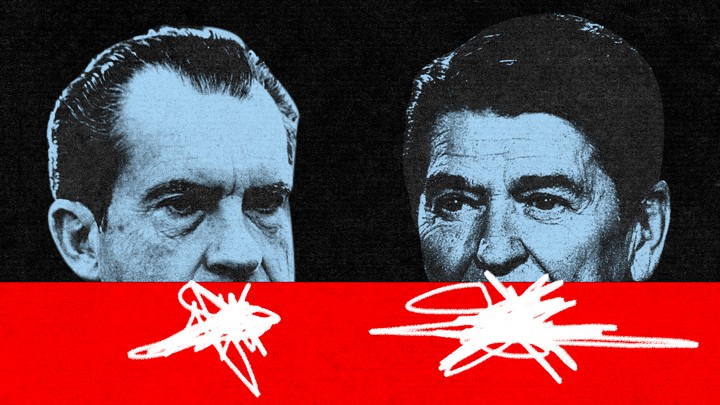 Listen to the recording on Soundcloud link below.

The past month has brought presidential racism back into the headlines. This October 1971 exchange between current and future presidents is a reminder that other presidents have subscribed to the racist belief that Africans or African Americans are somehow inferior. The most novel aspect of President Donald Trump’s racist gibes isn’t that he said them, but that he said them in public. The exchange was taped by Nixon, and then later became the responsibility of the Nixon Presidential Library, which I directed from 2007 to 2011. When the National Archives originally released the tape of this conversation, in 2000, the racist portion was apparently withheld to protect Reagan’s privacy. A court order stipulated that the tapes be reviewed chronologically; the chronological review was completed in 2013. Not until 2017 or 2018 did the National Archives begin a general rereview of the earliest Nixon tapes. Reagan’s death, in 2004, eliminated the privacy concerns. Last year, as a researcher, I requested that the conversations involving Ronald Reagan be rereviewed, and two weeks ago, the National Archives released complete versions of the October 1971 conversations involving Reagan online.

When the UN took its vote to seat a delegation from Beijing instead of from Taiwan in 1971, members of the Tanzanian delegation started dancing in the General Assembly. Reagan, a devoted defender of Taiwan, was incensed, and tried to reach Nixon the night of the vote. Reagan despised the United Nations, which he described as a “kangaroo court” filled with “bums,” and he wanted the U.S. to withdraw from full participation immediately. Nixon was asleep when Reagan called, so they spoke the next morning. Reagan’s slur touched an already raw nerve. Earlier that day, Nixon had called his deputy national security adviser, Al Haig, to cancel any future meetings with any African leader who had not voted with the United States on Taiwan, even if they had already been scheduled. “Don’t even submit to me the problem that it’s difficult to turn it off since we have already accepted it,” Nixon exclaimed. “Just turn it off, on the ground that I will be out of town.”

Nixon’s anger at the UN delegations from African nations for the loss was misplaced. His own State Department blamed factors other than African voting, including maneuvering by the British and French behind the scenes, for the loss. But Nixon would have none of it. The Africans were to blame.

Had the story stopped there, it would have been bad enough. Racist venting is still racist. But what happened next showed the dynamic power of racism when it finds enablers. Nixon used Reagan’s call as an excuse to adapt his language to make the same point to others. Right after hanging up with Reagan, Nixon sought out Secretary of State William Rogers. In this file photo, a sign in New York calls on countries throughout the globe to support Taiwan’s entry into the UN.

Even though Reagan had called Nixon to press him to withdraw from the United Nations, in Nixon’s telling, Reagan’s complaints about Africans became the primary purpose of the call.

“As you can imagine,” Nixon confided in Rogers, “there’s strong feeling that we just shouldn’t, as [Reagan] said, he saw these, as he said, he saw these—” Nixon stammered, choosing his words carefully—“these, uh, these cannibals on television last night, and he says, ‘Christ, they weren’t even wearing shoes, and here the United States is going to submit its fate to that,’ and so forth and so on.”

The president wanted his patrician secretary of state to understand that Reagan spoke for racist Americans, and they needed to be listened to. “You know, but that’s typical of a reaction, which is probably”—“That’s right,” Rogers interjected—“quite strong.”

Nixon couldn’t stop retelling his version of what Reagan had said. Oddly unfocused, he spoke with Rogers again two hours later and repeated the story as if it would be new to the secretary.

“Reagan called me last night,” Nixon said, “and I didn’t talk to him until this morning, but he is, of course, outraged. And I found out what outraged him, and I find this is typical of a lot of people: They saw it on television and, he said, ‘These cannibals jumping up and down and all that.’ And apparently it was a pretty grotesque picture.” Like Nixon, Rogers had not seen the televised images. But Rogers agreed: “Apparently, it was a terrible scene.” Nixon added, “And they cheered.”

Then Nixon said, “He practically got sick at his stomach, and that’s why he called. And he said, ‘It was a terrible scene.’ And that sort of thing will have an emotional effect on people … as [Reagan] said, ‘This bunch of people who don’t even wear shoes yet, to be kicking the United States in the teeth’ … It was a terrible thing, they thought.”
Nixon didn’t think of himself as a racist; perhaps that’s why it was so important to him to keep quoting Reagan’s racism, rather than own the sentiment himself. But Reagan’s comment about African leaders resonated with Nixon, because it reflected his warped thinking about African Americans.In the fall of 1971, the Nixon administration was engaged in a massive welfare-reform effort, and was also facing school busing. These two issues apparently inspired Nixon to examine more deeply his own thinking on whether African Americans could make it in American society. Only three weeks before the call with Reagan, Nixon had revealed his opinions on Africans and African Americans in a conversation with the Harvard professor Daniel Patrick Moynihan, who had briefly served in the Nixon administration. Nixon was attracted to the theories of Richard Herrnstein and Arthur Jensen, which linked IQ to race, and wondered what Moynihan thought.

“I have reluctantly concluded, based at least on the evidence presently before me … that what Herrnstein says, and what was said earlier by Jensen, is probably … very close to the truth,” Nixon explained to a quiet Moynihan. Nixon believed in a hierarchy of races, with whites and Asians much higher up than people of African descent and Latinos. And he had convinced himself that it wasn’t racist to think black people, as a group, were inferior to whites, so long as he held them in paternalistic regard. “Within groups, there are geniuses,” Nixon said. “There are geniuses within black groups. There are more within Asian groups … This is knowledge that is better not to know.”

Nixon’s analysis of African leadership reflected his prejudice toward America’s black citizens. This is, at least, what he told Moynihan. “Have in mind one fact: Did you realize there is not, of the 40 or 45—you’re at the United Nations—black countries that are represented there, not one has a president or a prime minister who is there as a result of a contested election such as we were insisting upon in Vietnam?” And, he continued, a little later in the conversation: “I’m not saying that blacks cannot govern; I am saying they have a hell of a time. Now, that must demonstrate something.”

Fifty years later, the one fact that we should have in mind is that our nation’s chief executive assumed that the nonwhite citizens of the United States were somehow inferior. Nixon confided in Moynihan, who had been one of his house intellectuals, about the nature of his interest in research on African American intelligence: “The reason I have to know it is that as I go for programs, I must know that they have basic weaknesses.”

As these and other tapes make clear, the 37th president of the United States was a racist: He believed in treating people according to their race, and that race implied fundamental differences in individual human beings. Nixon’s racism matters to us because he allowed his views on race to shape U.S. policies—both foreign and domestic. His policies need to be viewed through that lens.
The 40th president has not left as dramatic a record of his private thoughts. Reagan’s racism appears to be documented only once on the Nixon tapes, and never in his own diaries. His comment on African leaders, however, sheds new light on what lay behind the governor’s passionate defense of the apartheid states of Rhodesia and South Africa later in the 1970s. During his 1976 primary-challenge run against Gerald Ford, Reagan publicly opposed the Ford administration’s rejection of white-minority rule in Rhodesia. “We seem to be embarking on a policy of dictating to the people of southern Africa and running the risk of increased violence and bloodshed,” Reagan said at a rally in Texas.These new tapes are a stark reminder of the racism that often lay behind the public rhetoric of American presidents. As I write a biography of JFK, I’ve found that this sort of racism did not animate President Kennedy—indeed, early on he took political risks to help African leaders, most notably Gamal Abdel Nasser and Kwame Nkrumah. But his reluctance to do more, sooner for African Americans cannot be separated from the paternalism he brought to the Oval Office or the prejudice held by parts of his Boston inner circle. 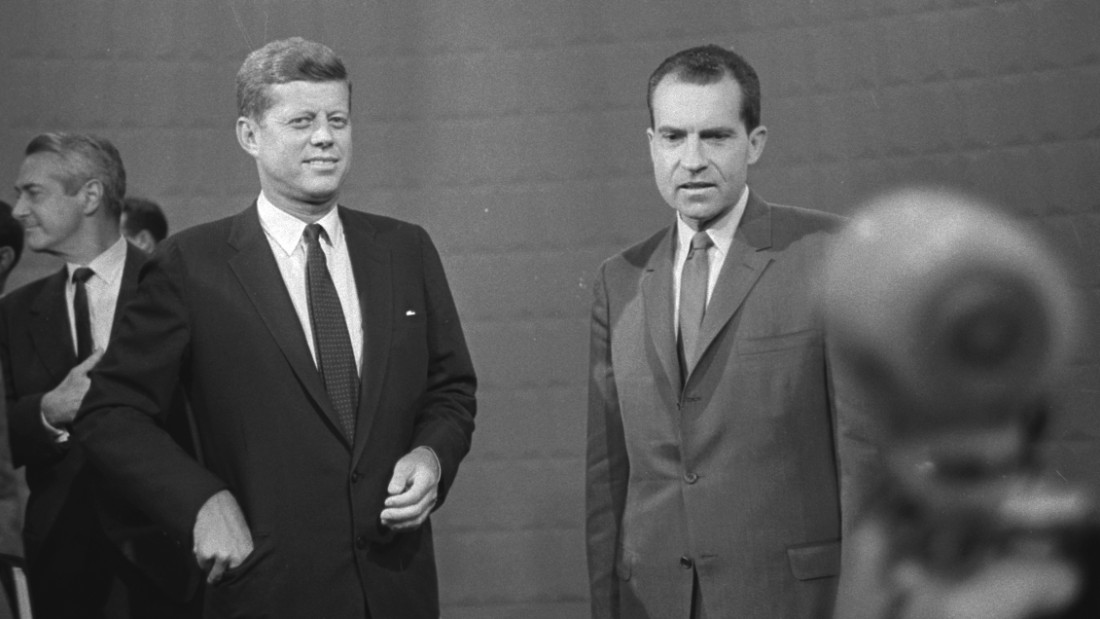 Kennedy, at least, learned on the job that securing civil rights for all was a moral imperative. Donald Trump, on the other hand, is a symptom of a sickness that dwells in American society, sometimes deeply and weakly, sometimes on the surface and feverishly. He bears responsibility for his own actions, but the tropes, the turns of phrase, the clumsy indirection, and worse, the gunk about American society that he and his most devoted followers pass off as ideas, have an ugly tradition. It is not at the core of the American tradition, for what makes us mighty and successful is that we are much more than the narrowest of our minds. But it remains an ineluctable part of American culture, nonetheless.

Nixon never changed his mind about the supposed inherent inferiority of Africans. At the end of October 1971, he discussed the UN vote with his best friend, Bebe Rebozo. Bebe delighted Nixon by echoing Reagan: “That reaction on television was, it proves how they ought to be still hanging from the trees by their tails.” Nixon laughed.

These days, though Trump’s imagery is less zoological, it is pretty much the same in spirit. And this president, unlike Nixon, doesn’t believe he needs to hide behind anyone else’s racism.

First published in The Atlantic and written by Tim Naftali.

TIM NAFTALI is a clinical associate professor of history at NYU. He was the first director of the Richard Nixon Presidential Library and Museum.