This year, the African Union (AU) Summit in Niamey Niger, witnessed the official launch of AFCFTA.  While the details of operationalization of the world’s largest free trade area such as the rules of origin, free movement of people, services and goods, are still being worked out, we can celebrate this momentous epoch.  One way to do so is to present an artistic impression of this historical milestone.  The artistic rendering of “African Free Trade area—We are one” is mixed media art.  This article presents a brief explanation of what this art work symbolizes and means.  Art is very subjective, so other art critics may see something different.

The art piece is deliberately complex in style and medium so as to reflect the complex and mysterious nature of the African reality that remains enigmatic and a riddle. For this reason, no attempt will be made to explain the method used to produce the art work.  Just like the African continent, its philosophy, religious beliefs, culture, diverse peoples, etc., the art work defies clear cut definition and categorization.  Africa still remains a puzzle if not an enigmatic phenomenon.

The observer is invited to identify the background on which the main art piece is superimposed. The background is a common object made by ordinary African people and reflects some elements of African aesthetics and utility, as well as mode of economic production. What is it?

The words around the art piece are pretty straight forward: “African Free Trade Area—We are one.”  The theme of African unity is central to the African dream and aspiration.  “We are one” is a strong call for unity of all African people both at home and in diaspora.  This is rejection of the divisions imposed on Africans by slavery (creating diaspora African countries and people of African descent who are citizens of other countries), colonialism, colonial boundaries, foreign religions and neocolonialism.  African Free Trade Area is celebrated as the call to end all the divisions of African people.  Circularity is considered an African concept that captures the essence of African philosophy.  Completeness, wholeness, infinity and continuity, are some of the themes captured in the shape of a circle.  African pots, African huts, and calabashes, have a circular shape to symbolize these aesthetic and utilitarian elements.  Circularity also symbolizes power and strength.

The black outer ring symbolizes a well known theme in African philosophy developed by Leopold Sedar Senghor.  Black color is also used for the words: “African Free Trade Area: We are One.”  What is this theme that Leopold Senghor is well known for? 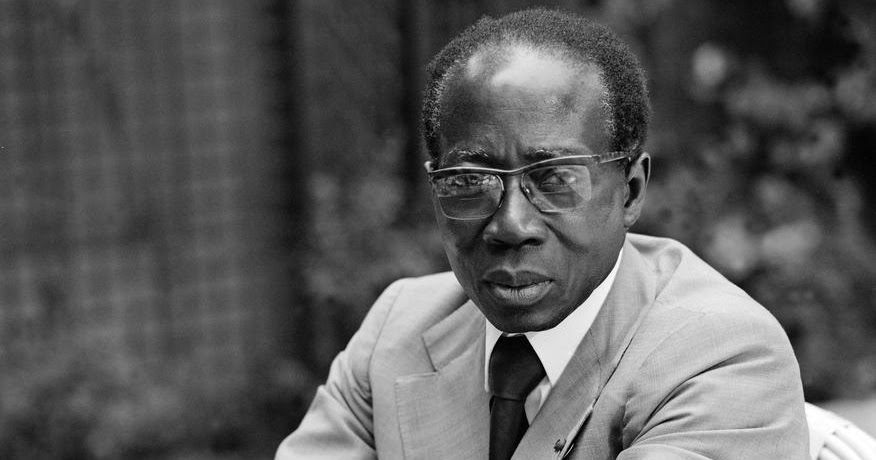 Next to the black ring is the green ring.  Green symbolizes one major resource of the African continent that is under threat.  The green color is also in the African map at the center of the art work.  What does green color stand for?

Red color symbolizes another very important reality in African belief system.  It is a symbol of life, and it has special meaning in rituals such as circumcision and friendship pacts.  What is it?

Outside the African map there is the color blue, but also some blue is in the African map. Blue symbolizes a very important thing that is also associated with life, and without it, no life is possible.  What is it?

Within the African map are some brown pieces. These were not drawn and they are pieces of something that most people use on a daily basis to sustain life.  If Africa implements the free trade area and gets united, it can easily be the world’s leading supply of this item.  What is it and how was it used to make the African map in the art work?

There are some yellow pieces within Africa.  These represent one major source of wealth in Africa, and often times it has been a source of conflict and war. What is it?

Finally, the art work is done on an object that is commonly used in a domestic setting.  The brown pieces were placed on it and well-arranged to make the African map.  What is it?

I have used riddles in this brief artistic exposition, since riddles are a form of artistic oral communication typical of most African societies.

I will end this article with a poem, since poetry is a very common mode of communication in Africa:

Land of multitude of languages,

Bread-basket of the world;