The prohibition based regime supported by criminal sanctions is deemed to be ineffective, inefficient and unfit for purpose both by many members of the public and those who administer it. Despite its illegal status, marijuana is readily available and its use is prevalent across the region and across all classes, races and social status. The prohibitionist legal regime and the harsh penalties, remnants of a now discredited ‘war on drugs’ approach, have failed to deter usage.

Influential international and regional authorities have acknowledged this and called for a new approach, centred on public health and rights, to treat with cannabis/ marijuana. CARICOM itself endorsed this approach in 2002 at its Heads of Government Meeting, but has failed to implement it. Moreover, there are many arrests and much imprisonment, pressuring law enforcement resources and filling the jails with otherwise law-abiding citizens who have had small amounts of cannabis/ marijuana in their possession, exacerbated by their inability to raise bail. Law enforcement personnel themselves complain about this ineffective, wasteful system and believe that their resources are better employed fighting serious crime. They debunk myths that cannabis/ marijuana is a causative factor in criminal conduct and believe that most persons use for stress relief. They also acknowledge that the poor are targeted in enforcing cannabis/ marijuana law while the rich are not.

While asserting that cannabis/ marijuana does not cause criminal behaviour, law enforcement personnel
warn that it encourages criminal activity through the protection of ‘turf’ and gang wars, leading to violence. Some of this violence occurs as a result of heavy handed policing in eradication efforts, where millions of black market profits are lost each year. Continued prohibition perpetuates the illicit market which has negative implications for citizen security and attempts to ensure quality and safety in products. For example, this market encourages unsafe
products such as those with high Tetrahydrocannabinol (THC) and contaminants. It also provides undeserved opportunities for criminal entrepreneurs.

Law reform and decriminalization help to decrease this illicit market drastically. The law is also demonstrated to be inconsistently applied, disproportionate and incongruous, particularly when viewed against the backdrop of other substances proven to be harmful, like alcohol, which are not similarly prohibited, criminalized or demonized. Most Caribbean law on cannabis provide for mandatory minimum penalties (typically draconian) which make the law
harsher, especially within a strict liability regime. Persons spend long periods of imprisonment for possessing small amounts of cannabis/ marijuana, even persons who use for medical reasons. Significantly, persons arrested for cannabis/ marijuana can end up with much harsher penalties than those convicted of serious victim-based crime.

Cannabis/ marijuana is a victimless crime. As the Commission was told often: “nobody ever die from marijuana.” For example, wounding with intent offences can result in non-custodial sentences in some cases, (even when death occurs) while a person with 1.16 grams of cannabis can be sentenced to imprisonment for 40 years. This is a travesty of any justice system. These concerns undermine the legitimacy of the law and inhibit its enforcement.

Many people do not accept the law on cannabis and recognize clearly that important rationales for law making, especially criminal law – to cure real ‘harm’ or ‘mischief’, are lacking. The legal and social dimensions on the issue of marijuana are wide, varied and very compelling. They embrace issues of human rights and deep, abiding concerns about equity and social justice which must be considered in any regulatory policy. They range from the very conception of the law, to the patterns of arrest, trial and sentencing.

The Commission listened to many heartrending stories of persecution and harassment from CARICOM citizens. Biases and inequality are discernible in every aspect of the administration of the criminal justice system relating to marijuana, particularly with regard to the poor, marginalized and Rastafarians. Stereotyping and hidden prejudices remain, even in our courts. Because of how Caribbean societies are stratified, such inequity often translates into underlying race biases. Studies demonstrate that drug use itself, is often a function of poverty and lack of opportunities, as a coping mechanism, so that the legal system penalizes and criminalizes the already vulnerable.

There is therefore a discernible cycle of disadvantage based on status. Persons who get arrested and convicted for marijuana typically belong to a particular social class and race, (racist and classist) which does not correspond to the many who actually use it. Yet, law and policy remain blinded to these unequal paradigms and prejudices, revealing a structural and systematic defect of equity in the criminal justice system. The impact of such criminalization has been not only a diminution of economic, social and cultural rights (the right to work/ livelihoods, health), but to civil and political rights such as equality. 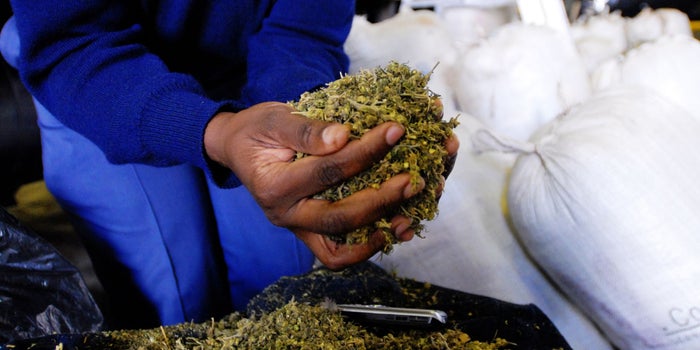 The propensity to incarcerate (warehousing), has led to a wasteful and costly system where many potentially
productive lives and families have been destroyed without benefit to the society. Modern jurisprudence also indicates that important human rights are at stake. Courts in Canada and the US have found that denying persons the ability to grow cannabis/ marijuana at home for use as a personal medicine violates human rights.

These are persuasive precedents and are likely to penetrate Caribbean courts, expanding and in some cases, reversing more restrictive older human rights precedents on cannabis/marijuana. Such precedents are amplified by recent right to privacy judgements in Caribbean courts. These cases have held that it is unconstitutional for the state to prevent individuals from such use when taken to promote their health. When the precedents are read in conjunction with recent human rights precedents in the region, the Commission advises that the current prohibition on home-use in existing law is unlikely to be sustained if challenged in the courts.

Please note that you can find parts 1 – 4 of the “Final Report” in last weeks articles. Please help the AHF in its quest to educate more Barbadians about the research done by the CARICOM Regional Commission on Marijuana and its findings by sharing this article with friends and family. Everyone should know!