On the Emancipation statue in Barbados reads the inscription,“Ode to Jin Jin”. It has been said that this short refrain was sang by the enslaved when they heard news of Emancipation. It salutes Queen Victoria (Jin Jin) for setting the slaves free. The irony of this inscription on a statue commemorating Emancipation is that it takes all agency away from the enslaved whose revolts against the institution of slavery were a major cause in its termination and places it solely in the hands of the white saviour, the benevolent Queen Victoria.

Journey now to the center of Bridgetown, and you find the statue of Lord Horatio Nelson, defender of British imperialist interests. Nelson sailed nearby but never visited Barbados and wrote disdainfully of the island. His statue was erected by white Barbadian colonists even before their counterparts in London had built theirs in Trafalgar Square.

Some years ago, the Government of Barbados had changed the name of Trafalgar Square in Bridgetown, where the statue of Nelson is situated, to Heroes Square. Yet it was not courageous enough to move the statue that celebrates the British colonial and imperial enterprise. You see, the voice of opposition to unseating Nelson is too loud. It is led by white Barbadians and receives support from a significant number of black Barbadians.

One can easily find parallels in the arguments espoused in defence of keeping Nelson statue where it is with those in the US protesting the taking down of monuments honouring a brutal past. They range from the farcical ones such as tourists come to Barbados to visit the statue so moving it does not make economic sense to the insidious ones about not erasing our common history, as if the oppressed are obligated to idolise their oppressors. 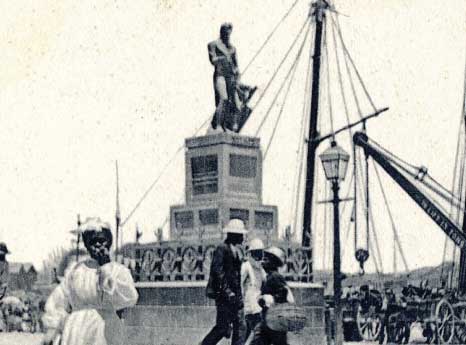 The truth is that most of the people who oppose Nelson’s current location are not calling for the destruction of the statue and would find his repositioning to another area or to a museum acceptable. Meanwhile, in Barbados’ Heroes Square, a space meant to honour those Barbadians who contributed to the progress of the nation, there is one statue, that of Lord Horatio Nelson, defender of slavery, imperialism and colonialism. It must be noted here that the boundary of Heroes Square has since been moved. This now means Nelson does not stand in Heroes Square, he stands in the “Cage”.

This hostility to the mere mention of removing Nelson is symptomatic of the mental toll that the British colonial project continues to exert in Barbados. One only has to glance at the plethora of streets and institutions that pay homage to British royalty. Any calls to rename them to something more apt are met again with accusations of revisionism and erasure of history. Likewise, one only has to look at what the Barbados National Trust focuses its preservation work on to witness how those who command sway on the island feel about its history.

If it is a plantation or great house exulting in whiteness and the grandeur of the lives of the enslavers, then expect the Trust to be at the forefront of conservation efforts. Anything venerating blackness, black Heroes and their contribution is left to the wayside by the Trust. Unsurprisingly, one of the past Presidents of the Trust is Sir Paul Altman, real estate developer extraordinaire and a man acclaimed by Barbadian politicians and most Barbadians in general as evidenced by him being awarded a knighthood in 2016. Altman is responsible for the sale of huge swathes of Barbadian land to rich white foreigners, many of them from the UK. Since his land development ventures have led to the environmental degradation of the island, the displacement of black Barbadians and the heinous overpricing of land on the island to the detriment of the average citizen, his claims of being a proud Barbadian are obviously limited to a white elitist Barbadiana.

Altman is not alone with his formidable position and his ability to influence black Barbadian politicians. Numerous white Barbadians employ comparable clout as a result of their lasting economic control. Naturally, when white economic power is spoken of, white Barbadians cry racism and point to black businessmen and Barbados gaining independence in 1966. Yes the island is independent and there are black businessmen. Some of them are indeed very well off and some of them engage in the same corrupt practices of influencing public servants and politicians. Nevertheless, this does not negate the fact that white people in Barbados carry on doing as they please because 300 plus years of economic dominance with its concomitant structural inequalities allow them to. A justice system that treats white people, and rich Indians for that matter, totally differently to blacks is not unique to the USA.

The Europeans created a socio-economic, cultural, political and racial order in their colonies that ensured European pre-eminence and tyranny. This is not something that is simply overturned by a legal independence document. Neither is an arrangement in place for over 300 years just disassembled in a few decades, especially when there is an absence of any concerted effort to do so. Indeed, Barbadian and Caribbean academics including Bedford, Beckles and Carmichael have written about the smooth transfer of rule from the UK to British educated elites in the Caribbean, the confidence of the British in granting independence because they felt secure that the order they fashioned would persist, and the fact that after independence, the state did not embark on a radically altered form of relations with its citizens.

Whiteness, the hegemony of whiteness, the confidence of it, the centrality of it, underpins how everything in America works. While it is on full display there, it operates in a much more sinister form in places like Barbados where the population is majority black and the country is presided over by black people. We have a few white Bajans who try to disguise their racism and the structural racism entrenched in the country in academic terms. They assert that people in Barbados who speak about racism on the island are exaggerating especially as the island has been black led for over half a century. As if the brutal history of white reign and the structures engineered to enslave and exercise supremacy over black people can be erased in a few decades. They claim that it is improper to draw parallels between different countries like Barbados and the USA, as if the European colonisers were disjointed entities participating in separate colonial and imperial ventures at distinctive stages in world history and as if race was not an integral aspect in the colonisation of the world by Europeans. These are the white Bajans I like to call “the contextualisers”. They like to contextualise slavery and colonialism and excuse the genocidal actions of their white ancestors by contending that what occurred during those times was within a period when it was the norm. Therefore, people should desist from looking back into history with sullied 21st century eyes since when they do this, they will obviously regard everything that happened in negative terms. Then we have the Bajan whites who find themselves on social media, unable to resist the “freedom” the platform affords them to spout the most racist and bigoted diatribe against blacks, Muslims and minorities in general. Like Trump supporters they see nothing wrong with their heinous views but are quick to cry out racism and play the victim anytime the topic of race is raised in Barbados. Nonetheless, history reveals that wherever white people have been minorities in areas with a majority of non-white people, they have been the oppressors and not the victims. Barbados is not an exception to this stark reality. All the while, white Barbadians in general fence themselves off in enclaves, socialise among themselves and live a much removed existence from most Barbadians.

To be continued in next article.

More on the African Heritage Foundation.