Let not too late, too late be the cry. Where there is a spark you can expect a fire to follow.

My daughter aged 17 attends the Lodge School. She is in 6th form and has lamented to me, her grandmother and others on the state of the school bus service from her school. She is of the opinion that what is happening with the buses for her school is ridiculous and very dangerous. Lodge as she rightly notes is located in a secluded area and not very safe for school children to be waiting on a bus after dark. She says that for safety,  students stay in groups, which I must say is a very wise thing for them to do.

A member of the organization that I am the president of, the African Heritage Foundation, has a daughter that also attends The Lodge School, she complains that her daughter often reaches home after 7pm due to buses coming extra late for the students. This is of great concern to her and rightly so.

As my daughter tells it, the younger students are allowed to fill the fist bus or two that come to collect the children in the evening. This is all well and good but adequate provisions must be made immediately to ensure the safety of the older children.

I was listening to the news the other day and paying close attention to what the Minister of Education was saying as she moved to resolve the conflict at the Grantley Adams Secondary School as it pertained to the lunch issue. One of the things she spoke of was the need to ensure the well being of students as it pertains to their health. Thus, she spoke on improving the School Meals Service and I would expect meals offered in canteens at schools.  She noted that it was the reality, that there were families that could ill afford to constantly provide healthy meals for their children. In continuing she noted that the lunch meal were sometimes the only substantial meal of the day for these children. While the issue this articles seeks to address and influence is a better bus service for students of the Lodge School, I will take a minute to share my thoughts on what Minister Santia Bradshaw said about meals being provided at schools. It must be noted at this point that the same parents that cannot afford their children a healthy lunch meal cannot provide the same for breakfast, which as I recall is said to be the most important meal of the day. Studies have shown that it is unreasonable to expect students to perform well in their lessons when they are hungry. I have seen a breakfast program for school children in an improvised community initiated by the Barbados Youth Action Program, that is in my opinion is an initiative that the Ministry of Education should take an example from. Empower organizations such as these to make their community initiatives National. Help them acquire the resources needed to build their capacity so they can effectively address some of the needs of our nation’s youth. 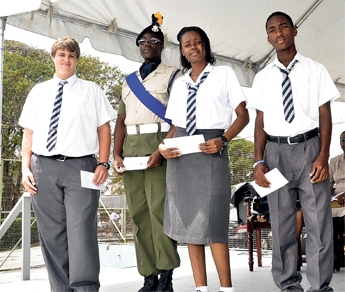 Write a letter for youth safety.

Getting forward to the issue at hand, I am asking the Minister of Education to look into the situation of the student bus service for the Lodge School and have it resolved ASAP. Also note that students of one school have seen the protest actions of students from another school on an issue that is of concern to them, and may very well feel that a protest to ensure their safety is in order.

My daughter’s safety is of the utmost importance to me and as such I will be writing a letter to the Ministry of Education to address this matter with haste. I urge other parents and concerned citizens to ask the Minister of Education in writing to act promptly and resolve this situation.

I am asking you to share this message and let the voice of concern for our children be echoed far and wide.

The youth are speaking. Are we listening?