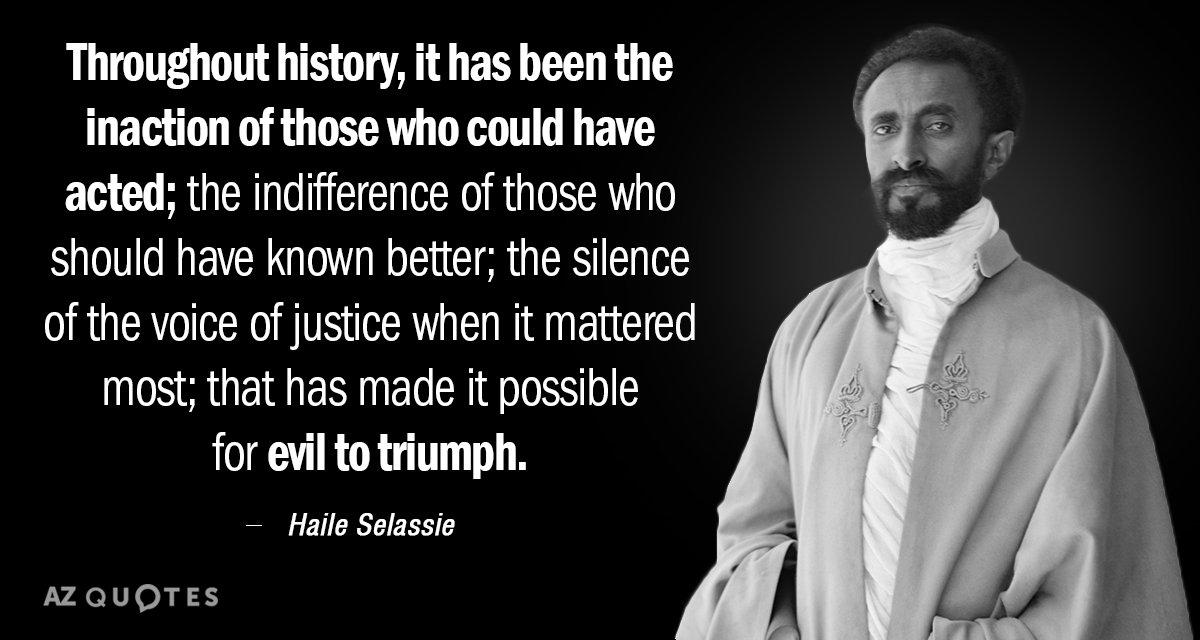 We were present at the sixteenth general assembly of the League of Nations of Sene 23, 1928 [June 30, 1936], to explain the fascist invasion of Our country and the atrocities perpetrated on the people. The next day Sene 24th [July 1], while the assembly continued its deliberations, all the small nations that had placed confidence in the protection the League was supposed to provide, were displeased at the backsliding exhibited in the treatment of Ethiopia’s case, and some delegates openly criticized the League for deserting its fundamental objective.

The Swedish envoy detailed the failure the League suffered as the result of its inability to save Ethiopia and presented the opinion of the Swedish public. The Irish envoy, Mr. de Valera, on his part, expressed his bitter grief. The envoy of New Zealand, Sir James Parr, voiced his painful feelings of despair, proposed placing heavy sanctions on Italy, and explained at length New Zealand’s readiness to go along with other members of the League in this respect, should the majority decide as such. The Chinese envoy, Dr Wellington Koo, pointed out that the League helped foment the present crisis because it had refrained from condemning Japan.

The Iranian envoy also indicated that no treaty could be operational unless a spirit of truth prevailed in the assembly. The Spanish envoy added that it was not the weakness of the Covenant per se that had failed to save Ethiopia; was good in and of itself. What proved to be bad was, he exclaimed, the means adopted to enforce the covenant.

The Soviet envoy Monsieur [Maxim] Litvinov criticized the League for failing to impose sanctions soon after Ethiopia and Italy found themselves in conflict [and] before the situation escalated into serious trouble. He added that a few countries had imposed the proposed sanctions, but with no visible result. Since the League had earned the confidence of even non-member countries, had the sanctions been strong from the outset, any aggressor would have been deterred. However, the handling of the sanctions was not comprehensive enough, and created the present problem. He reminded all member countries that, even now, in view of Article 16, they should realize the obligations by which they were bound and, beyond imposing sanctions, should provide military assistance.

The South African envoy, Mr. Charles Te Water, stressed that “the sanctions which were imposed on the aggressor state should not be lifted” and stated that it was not enough to pass resolutions concerning the relations between governments. We should be able to demonstrate our courage by translating them into practice. If we violate the resolutions we pass and do not put them into practice, “would not it be better for the member countries to give up their collective efforts altogether,” he added.

Yesterday we listened to the majestic speech of the Emperor of Ethiopia. The speech did not fail to move the hearts of each one of us. Surely, we had imposed economic and financial sanctions on the aggressor, but it did not work. Only military force can alter the situation in Ethiopia at this moment, but I do not think the current international situation will allow us to use military force. All the same, we have seen that the sanctions did not work, and it is better to lift them. For the time being, I need only to remind the League not to recognize Italy’s victory.

The Canadian envoy Mr. Vincent [Massey] stated that Canada had imposed the proposed sanctions on Italy…. but suggested that the economic sanctions be lifted since they were not strong enough, and since their contin­uation would not be of any value in bringing about the desired result.

The Austrian envoy, Mr. [Emeric] Pflugl, the arch-supporter of the fascist government said, “Italy is a country inspired by the principles of the League; it is also the herald of the sanctified good news of civilization.” The Hungarian envoy voiced similar collaborative opinions.

The economic sanctions bore no fruit because Britain and France feared that would spur Italy into joining Hitler, the man who had armed Nazi Germany and who had begun harrassing European democracies. Thus, the economic sanctions were imposed half-heartedly and timidly.

One peculiar problem was that, if England used its navy to impose an oil embargo, such an action was presumed to lead to misunderstandings with America over the freedom of sea traffic. For this and other reasons, it remained impossible to stop Italy’s aggression.

We, on Our part, prepared two draft resolutions to be presented by Our delegates to the assembly, and delivered them to the General Secretary of the League via the leader of our delegation, Dejazmatch Nasibu Zamanuel:

1st. If a country were to be subdued and occupied by force of arms, let not the government of the occupier be recognized;

2nd. Since in accordance with article 16 of the Charter of the League of Nations, Ethiopia was entitled to receive assistance, let the assembly, in consultation with the finance committee of the League, and in agreement with the capacity which the Ethiopian government claims to have, support and approve a loan of ten million pounds to Ethiopia under the guarantee of the member states.

That same day the French envoy presented a draft resolution containing such ideas as lifting the economic sanctions and accepting the annexation of Ethiopia to Italy as a fait accompli. The next morning these resolutions were presented to the general assembly [which,] without discussion or objection, upon the recommendation of the president, referred the matter to a committee which was scheduled to meet in the evening. After the committee had deliberated, the communique which came out the next morning disclosed that the suggestions of the French envoy had been criticized by the small nations, and, since the sentence which ostensibly recognized Ethiopia’s annexation by Italy weakened article 16, modification was suggested.

The committee did not complete its assignment and was instructed to meet on Saturday, Sene 27 [July 4] at 9 A.M., the General Assembly was scheduled to meet at 2 P.M.. Our envoys opposed the tight schedule in order to avoid hasty decisions. According to the standing regulations of the assembly, notice should have been given before any decision was to be taken.

As We learned from our delegates, a decision was made to call upon each country to vote on the recommendation submitted to the delegates, and it was felt that all were inclined to betray Ethiopia. On the issue of lifting the sanctions, Mexico opposed the details of the draft resolution and walked out of the meeting. The countries present… were called in alphabetical order to cast their votes…. forty-four… voted in support of the lifting of the sanctions, Ethiopia opposed, and four countries abstained.

The president of the committee announced that the proposal of the general committee, i.e. that Ethiopia already had been annexed to Italy, was rejected owing to lack of support. Then he reported that the ten million pounds loan that We requested, had been voted upon, and twenty-three countries opposed, one country supported, and twenty-five countries abstained. The first Geneva judgment ended in this manner, and the next meeting was scheduled for September 21, 1936.

You are invited to join the African Heritage Foundation (AHF)

What does the AHF do? The AHF has initiatives founded in ……..

AHF members pay a monthly fee of $20 BDS or $10 USD. Membership is open to people residing outside of Barbados. Contact 1 246 2604795  or email info@afrikanheritage.com for more information of the AHF, its initiative and how you can be a member of this collective.

Masimba – Founder and President of the AHF