The horrifying crimes done against Our people by the fascist Italians, beyond surprising the world, motivated many of Our friends to join Us in Our struggle.

As it turns out, a genuine friend is tested in times of crisis, and the heavy challenge We encountered has enabled Us to distinguish between a friend and foe. We cannot afford passing without mentioning the substantial support and political agitation which millions of Americans, particularly black Americans, have made. There was a big organization named “Union of African Natives Association” founded to help Ethiopia.

The organization established a newspaper called The Voice of Ethiopia and granted Us substantial support. The following instances explain the types of support this organization had given Us. 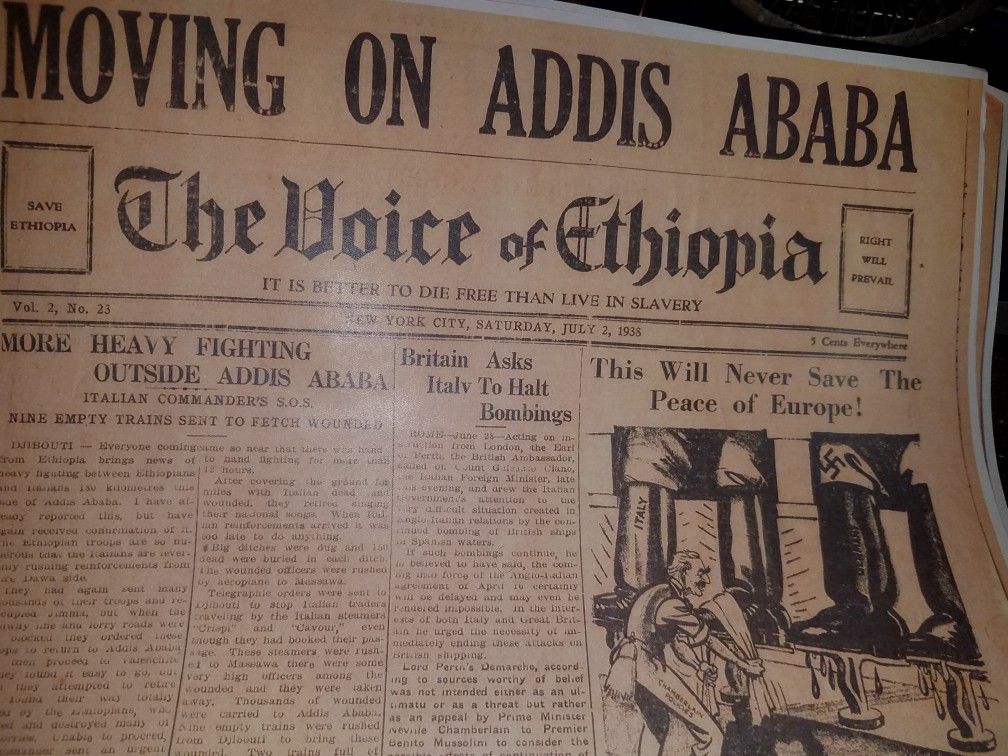 To His Majesty Haile Sellassie I
Fairfield, Bath
England

We black Americans express to Your Majesty our sympathy at the recent audacious massacre of the loyal people of Ethiopia and pray for your majesty’s well-being and Ethiopia’s victory.

To the President of the United States
The White House,
Washington D. C.

Dear Your Excellency the President,

In connection with the streamlined massacre of Ethiopians as the result of the bombing incident in Addis Abeba, the executive committee of the Union of African Natives Association, after holding an emergency meeting, has instructed me to send you a telegram as you are the president of 13 million black Americans, to request you to be involved in the matter in person so that you may preclude similar massacres of Ethiopians from happening again.

To the President of the United States
The White House,
Washington D. C.

Dear Your Excellency the President,

In the presence of all its members, the conference of the Union of African Natives Association has decided and given instructions to send this telegram to Your Excellency. Under the pretext of the bombing incident in Addis Abeba the fascist government has detained about two thousand Ethiopians under a state of emergency with the intention of exterminating them. We beseech you to use your office which has earned you worldwide popularity for your impartial attitude and your well-known sense of justice, to oppose the fascist government, if not in the name of the United States of America, then as a personal act. Up to now 1400 people have been killed. While such barbaric acts are being committed by the brutal regime, the rest of the world has remained a passive and bewildered spectator. So far no word of opposition has been heard. Although all of us are citizens of America, we feel strongly and pitifully about what is being done to the people of the continent whence our ancestors came. We solicit Your Excellency’s support because of the fact that we have such a close relationship and racial affiliation, and knowing that there has never been an American president as compassionate and as benevolent in attitude toward mankind as Your Excellency.

Since we have great confidence in Your Excellency, we believe that it may restrain the fascist government if you send some kind of message to the Italian ambassador in Washington.

We would like to bring to your attention that the black race has shown or has been enabled to show remarkable progress during your administration.

We have shown that blacks have souls and minds like everybody else and have worked with those who have free and good attitudes toward mankind. When one section of mankind destroys the other, it is not unusual for the Union of African Natives Association, the social body which represents all our people ranging from minors to seniors, to submit this appeal.

We, the thirteen million Black Americans, wholeheartedly believe that Your Excellency is the only one who can save the lives of 2,000 innocent people who have been condemned to death for a crime they have not committed.

To the Lord of Canterbury,
Lord Archbishop,
London, England

Thousands of believers meeting in different places under the sponsorship of the Union of African Natives Association condemn the brutal act of the Italian fascists for spilling in vain the blood of Ethiopian Christians who are fighting a just war for the independence of their country. The association also expresses its deepest regret over your silence as a representative and Vicar of Christ while heinous crimes are being inflicted on Ethiopia.

To the Prime Minister of Britain,
10 Downing Street,
London, England.

It is obvious that the people of Ethiopia, who are loyal to their emperor and comprise 14 million of Africa’s population, are in a dangerous situation. This happened as a consequence of the reprisals which ensued after a bomb was thrown at Graziani The news from Rome and Addis Abeba holds that the fascist plan is to exterminate the Ethiopians altogether. We were deeply disheartened at this. 14,000 people were shot dead in cold blood. Your Excellency is aware of the situation.

Many thousands of church members congregated in different places by the Union of African Natives Association have condemned the fascist brutalities and resolved in favor of the dispatch of this telegram.

We appeal in the name of God and for the sake of humanity to world public opinion to stop the fascists from their brutal killings of the Christian people of Ethiopia.

We appeal to your excellency, in particular, to air your opposition to the wanton extermination of a people who are heroically fighting to safeguard the independence of their country. To continue to inflict incessant and brazen crimes against black people is an obstacle to world peace and progress.

We appeal to you to be prepared time and again to help and save Ethiopians. Please earn the immortal gratitude of the natives of Africa during this times of darkness and agony.