Initially established by Emperor Menelik II in 1891, the current grand and ornate church wasn’t built until 1942 during the reign of Emperor Haile Selassie. With its copper dome, pinnacles, modern statues, murals, and colorful interior, the cathedral serves not just as a tourist attraction but one of the most important places of worship in the entire Horn of Africa nation. 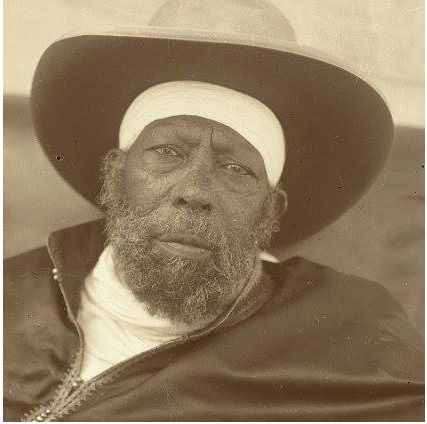 The church also serves as a burial ground for the citizens who died fighting the Italian invasion in the 1930s, along with Haile Selassie and his consort, Empress Menen Asfaw. It’s also the final resting place for the leaders killed by the Derg military junta that controlled Ethiopia between 1974 and 1987, besides ex-prime minister Meles Zenawi who led the country until his death in 2012. 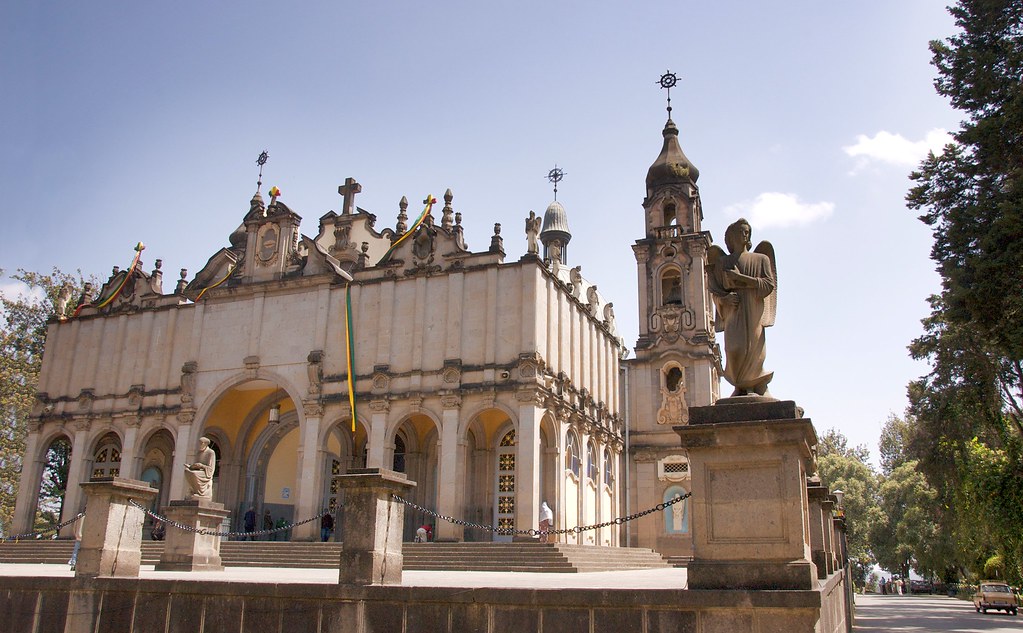 Buried among these prominent Ethiopians is Sylvia Pankhurst, the British suffragette, writer, artist, and anti-colonial crusader. Born in Manchester, England in 1882, Sylvia was the daughter of the prominent activist Emmeline Pankhurst who founded the Women’s Social and Political Union in 1903 to campaign for the rights of women to vote in the United Kingdom. Sylvia joined her mother and sister Christabel in the movement, designing leaflets and banners including the famed Holloway Prison brooch given to WSPU members who had been jailed.

Yet the tension between Sylvia and her family deepened particularly around World War I, which she opposed and they supported. As she became a vocal pacifist and socialist feminist, she also agitated against fascism and colonialism especially in Ethiopia where Benito Mussolini was ramping up his imperialist and military campaign in the 1930s.

In 1936, she went to Geneva to request the League of Nations to intervene and stop Italy’s invasion of Ethiopia—but in vain. She also started publishing The New Times and Ethiopia News to bring attention to horrors of the fascist occupation. Sylvia also befriended Haile Selassie who was forced into a five-year in exile in Bath, England after Italy occupied Ethiopia.

Even after Ethiopia was liberated and the monarch reinstalled in 1941, Pankhurst’s advocacy didn’t wane. Officials at the British foreign office labeled her a “busybody,” a “crashing bore,” and a “mischievous” campaigner who “only wants to be tiresome.”

Sylvia Pankhurst in 1942 after Ethiopia’s liberation.

Given her relentless activism, Haile Selassie invited her to come and live in Ethiopia where she eventually moved and settled in 1956. There, she published the popular monthly Ethiopia Observer; raised funds for Ethiopia’s first modern teaching hospital, the Princess Tsehai Memorial Hospital; and founded the Social Service Society voluntary welfare organization. In recognition of her work, Haile Selassie awarded her the Queen of Sheba medal. 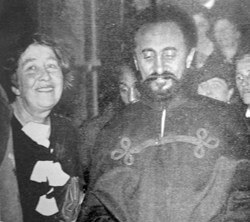 Her deep affection for Ethiopia was also carried on by her son Richard, an academic who wrote dozens of books about the country and founded the Institute of Ethiopian Studies at Addis Ababa University. Sylvia, who was opposed to marriage, had Richard with her Italian partner Silvio Corio—an issue that irrevocably ended her relationship with her mother Emmeline who couldn’t fathom a child born out of marriage.

The tombs of Sylvia Pankhurst and her son Richard.

Through her subversiveness and her anti-imperialist activism, Sylvia Pankhurst led a profound life much of it in service to Ethiopia. When she died in 1960 at age 78, Haile Selassie decorated her an “honorary Ethiopian.” She also became the first foreigner buried among the “patriots” in the Holy Trinity grounds. She, along with Richard who died in 2017, are buried in adjacent tombs facing the cathedral’s grand façade.

Following her death, tributes poured in from African leaders and political parties including Kwame Nkrumah and the South Africa’s African National Congress. 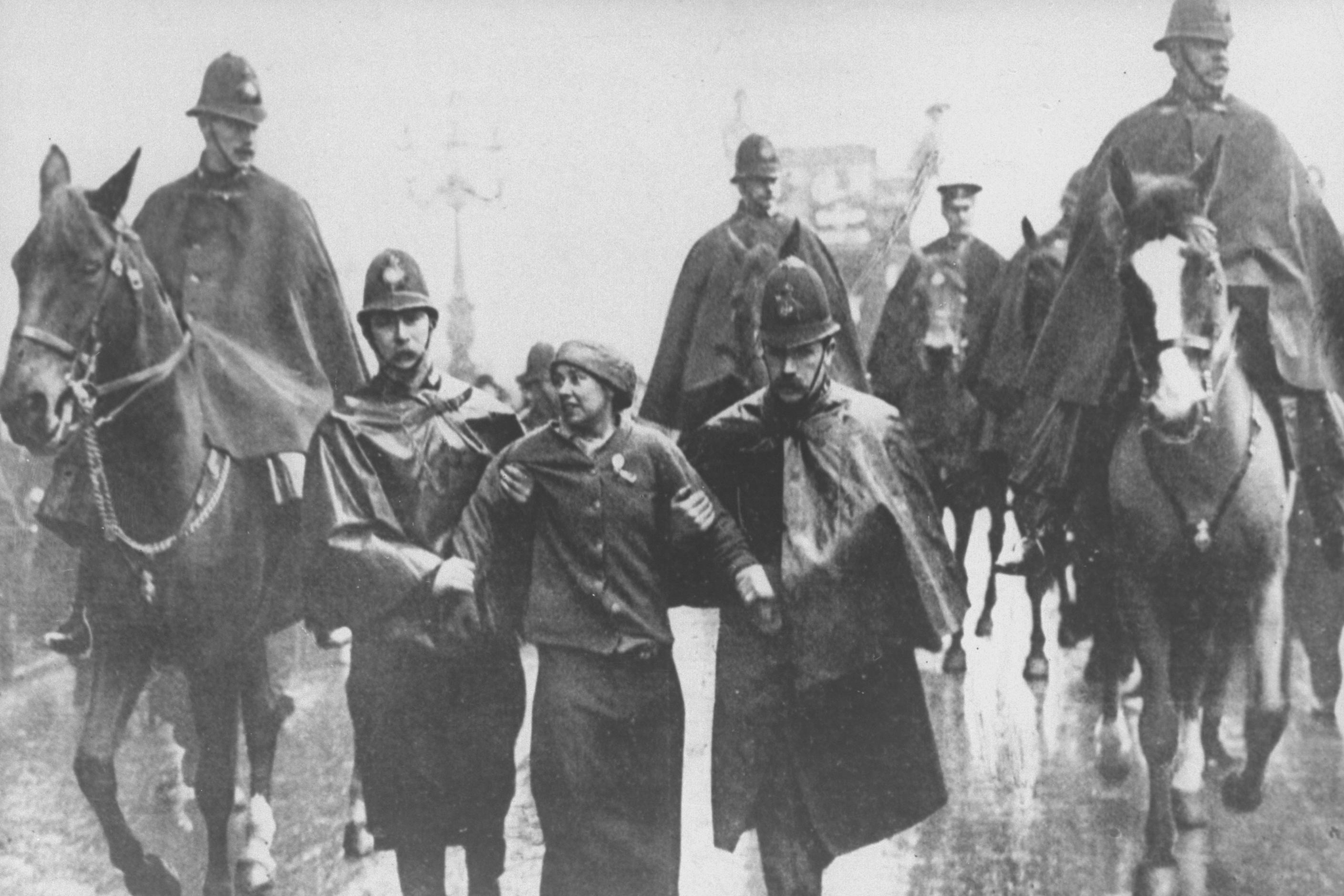 But one of the most poignant remembrances that captured her life as a fearless gadfly came from American scholar and civil rights activist W. E. B. DuBois who said that “the great work of Sylvia Pankhurst was to introduce black Ethiopia to white England … and to make the British people realize that black folks had more and more to be recognized as human beings with the rights of women and men.”