“Throughout history, it has been the inaction of those who could have acted; the indifference of those who should have known better; the silence of the voice of justice… that has made it possible for evil to triumph” – Ethiopian Emperor, Haile Selassie

Evil is triumphing in our land today and the voices of those who know better are silent. The first picture reproduced in this post was not taken on a remote corner of the globe yet to be introduced to civilised standards of public behaviour. They were taken on an island with a long history of civilisation and a high level of literacy.

Shouldn’t national artistic events be of such a standard and character that the entire family can enjoy them? How did we get there? We got here with the complicity of those responsible for promoting and overseeing national cultural events, and by the silence of those we expect to be the guardians of public decency and morality.

For these are times when anything goes in the name of culture, and when we’re all afraid to be labelled prudes and Victorians if we speak out against the disgusting behaviour of some of our artistes on the stage. Normally we would look to the Church as the watchdog against moral decadence, but even this institution now seems to have been cowered into silence, except when it comes to issues of sexual morality.

But as the bashment bandwagon rolls along, bells and whistles blaring, more sober minds cannot help but ponder on what will be its final destination. Will it, like the Gadarene swine rushing head-long into the sea, end up in perdition, or will decency, traditional values and sobriety withstand their most gruelling test to date? The signals do not offer me much cause for hope. The shrine of Bacchus in Barbados is well served by worshippers.

But as bacchanalia take over the national landscape, evidence is emerging that our advancement in social and economic terms could be in jeopardy.

The future of any society rest in the hands of its young people, especially so in an aging society like ours, for the human resource is an indispensable factor in economic and social advancement, all the more so in these difficult times. It’s a fact that was recognised by the (now deceased) visionary leader of Singapore, Lee Kuan Yew many years ago. The economic power-house that is Singapore today is predicated not only on foreign direct investment, but on a highly trained workforce of young people.

Lee could not do that if he had a population of young people living from wuk up to wuk up, afflicted with the mental state of bunnies in perpetual heat. Today his country is one of the wealthiest in the world. In two years’ time they are expected to have 188 000 millionaires, in a population of 5.6 million.

So what can we report in Barbados – that our young people are equipped and ready to take on the world? Well, if we are to go by the findings of a government survey on the fitness of high school graduates for the work environment, the answer sadly is “no”. Conducted by the Ministry of Labour and Social Partnership, the survey found that secondary school students show poor decision-making skills, poor innovative and creative skills and very poor conflict resolution skills.

Chief Research and Planning Officer in the Ministry of Labour Ricardo Norville said the findings meant that a significant number of secondary school students were not graduating with the generic skills needed to function in the workplace. We may add to that the report of a Senior Education Specialist with the Inter-American Development Bank, Dr Mariana Alfonso, on the Barbados education system, based on studies done between 1999 and 2012.

According to Dr. Alfonso, the research shows that many school leavers cannot even meet the basic requirement of four Caribbean Secondary Education Certificate (CSEC) passes for entry into the public service. In fact, she said only 6.1 per cent of the students in Barbados get the four passes in the first sitting of the exam. These unflattering facts fall on top of the shockingly low level of certification among secondary school leavers. The percentage leaving school without certification in a single subject stands at a staggering 80%.

We’re cultivating a culture among our young people that is indifferent to intellectual pursuit. The study of music, fine art, drama and other disciplines that stimulate and develop the intellect is fast becoming old fashioned, as the new rough, crude and vulgar bashment culture establishes its roots.

With the full blessing of officialdom and the slavish promotion of the electronic media, this base musical culture, with its degrading treatment of the female body and its mindless – often vulgar – lyrical content, is now in complete ascendancy. The purveyors may earn tens of thousands of dollars in prize money from various competitions; and their lewd offerings are regular fare on television.

Meanwhile young soloists, Pianists, Organists and Saxophonists who devote years to studying music and who play a far more valuable role in the nourishment of our souls, especially at concerts and ceremonies like funerals and weddings and religious gatherings, are almost completely ignored.

It is my view that Barbados has produced one of the most beautiful soprano voices – I make bold to say – anywhere in the Caribbean. Amanda Fields, a student of Doris Provencal, has thrilled audiences wherever she has sung in Barbados and elsewhere. But where are the competitions, the organized events at which her talent can be exposed and rewarded?
How many Barbadians have seen her on television or heard her angelic voice on radio? Very few. 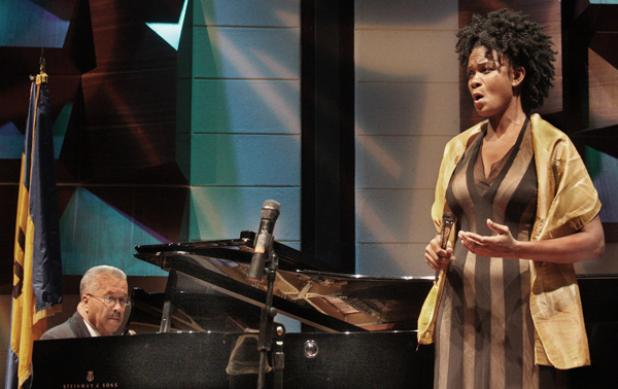 The British historian, Edward Gibbon, author of the literary work, “The History of the Decline and Fall of the Roman Empire”, identified the root cause for the fall as the loss of “civic virtue and individual morality”. If Gibbon is right, then, as I said in my book, Westminster’s Jewel – The Barbados Story, we have (definitely) crossed the Rubicon and the bottomless pit is now our only destination.