Barbados in many respects was England’s first experimental tropical agricultural export colony, and was successful for a number of related reasons. Contemporary opinion in the late seventeenth century acclaimed it the ‘richest spot of ground in the world.’ Private English capital, with the Crown’s blessing, financed settlement in 1627. Market conditions for its first commercial crop, tobacco, enabled the accumulation of quick profits, which were later utilized to finance the shift to sugar production in the 1650’s, after large scale, high quality Virginian tobacco production caused a glut on the European market and prices plummeted. 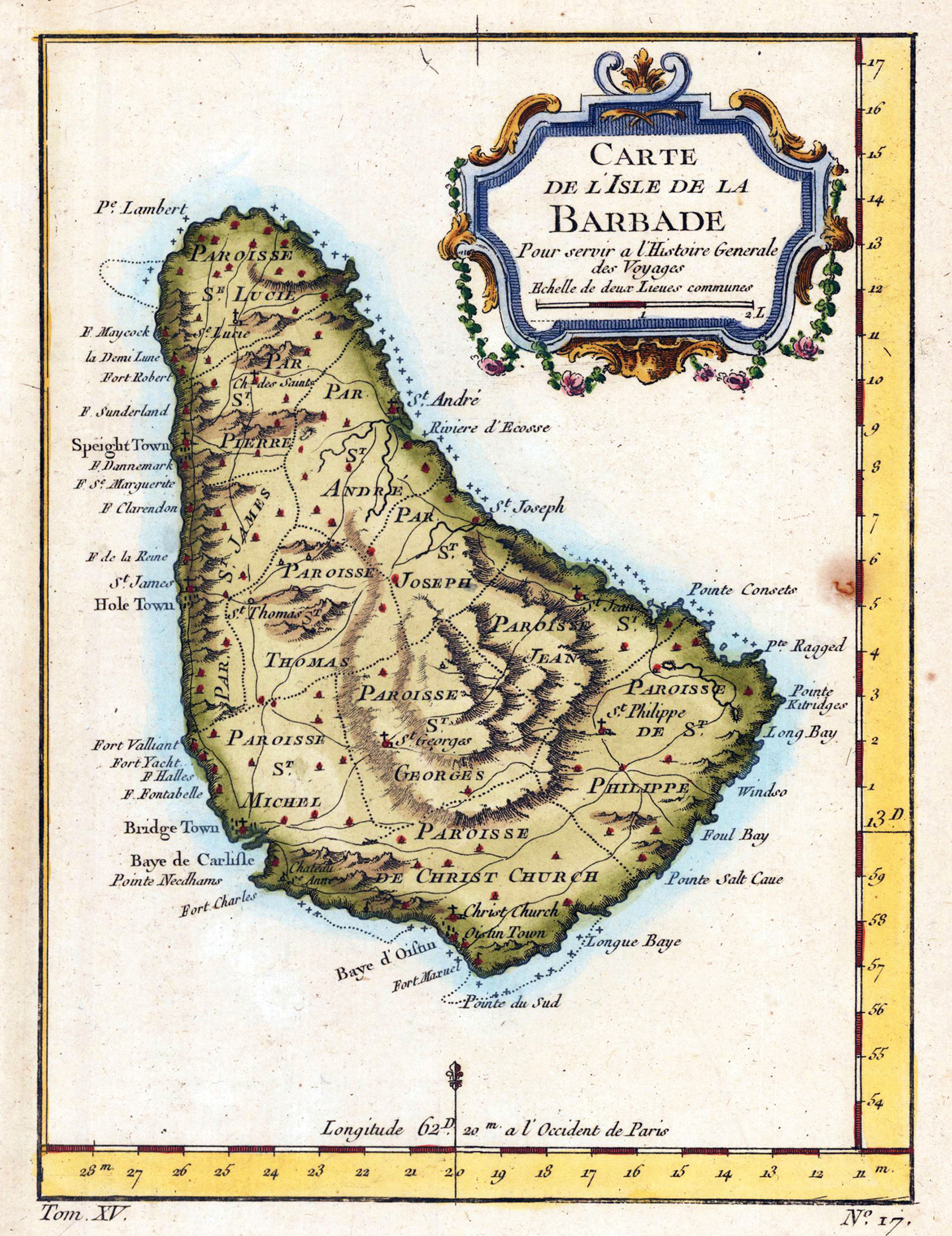 In the first decade, when settlement was tenuous, the first Barbadian settlers encountered no opposition from Spanish or French rivals, nor was there a native Amerindian presence to overcome. In fact, the opposite occurred. Amerindians were brought from Guiana in order to instruct the early settlers in survival skills, such as knowledge of local foods and preparation methods, and the most effective ways of clearing dense tropical forest. The Dutch were also helpful in nurturing the young colony. A locally elected legislature or House of Assembly was formed in 1639, which along with a nominated advisory Council and the Crown’s representative, the Governor of the island, ruled the island in tandem with the state sanctioned religion, the Anglican Church.

Just as the attempts at alternate crops such as indigo and ginger seemed doomed to failure, international affairs conspired to create an economic opening which guaranteed the survival and prosperity of Barbados. The Dutch in north-east Brazil and their allied community of Sephardic Jews were expelled from Recife and Bahia. Barbadian planters such as the Draxes, made contact with individuals fleeing Brazil, and a most successful transference of the sugar industry took place. The climate and soil conditions in Barbados were perfect for the growing of this sweet grass. 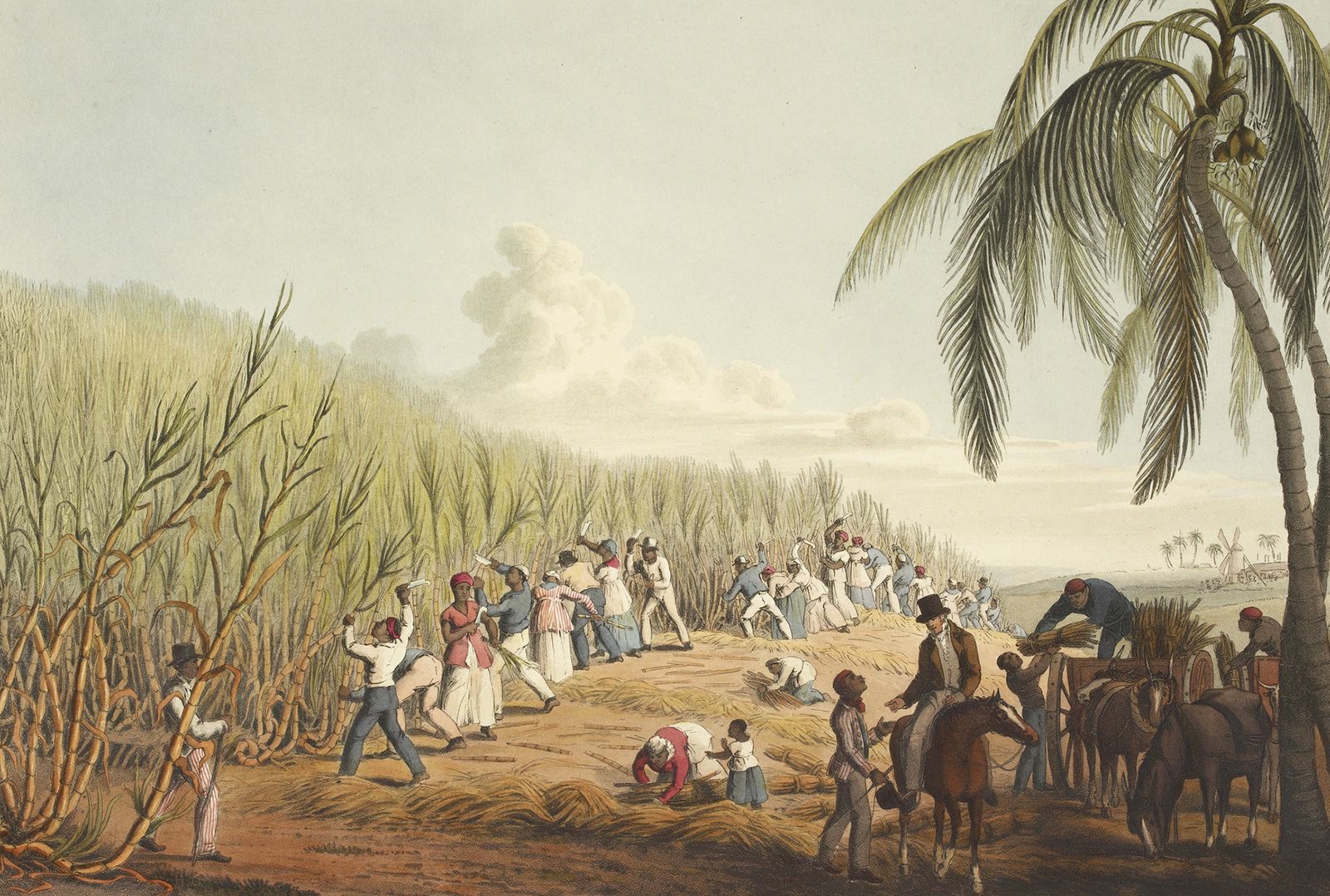 In a short space of twenty years, the economic phenomenon known as the Sugar Revolution transformed the face of Barbados forever. Tropical luxuriance gave way to a carefully controlled garden-like appearance of the entire island, as almost complete deforestation occurred. Not only was nature subjected to man’s tight control, but profound demographic and economic changes created a whole new society.

Sugar demanded labour and this poured into Barbados in increasingly large numbers, quickly making the island not only the most populated of England’s overseas colonies, but also one of the most densely populated places in the world. Initially whites from Britain were brought in, either as indentured servants or prisoners. For example, after the Somerset uprising, many West Country men were exiled or “barbadosed” by Judge Jeffreys. Nearly 7000 Irish were transported to the island during the Cromwellian period.

Barbados quickly acquired the largest white population of any of the English colonies in the Americas. In many respects, Barbados became the springboard for English colonisation in the Americas, playing a leading role in the settlement of Jamaica and the Carolinas, and sending a constant flow of settlers to other areas throughout the seventeenth and early eighteenth centuries.

However as the cost of white labour in England went up, planters, on the advice of Dutch and Sephardic merchants, turned to West Africa for their source of manpower. Black slaves were imported in large numbers from the Gold Coast region in particular, especially from what is today the country of Ghana. The Asante, Ewe, Fon and Fante peoples provided the bulk of imports into Barbados. Nigeria also provided slaves for Barbados, the Yoruba, Efik, Igbo and Ibibio being the main ethnic groups targeted.

It is estimated that between 1627 to 1807, some 387 000 Africans were shipped to the island against their will, in overcrowded, unsanitary ships, which made the Middle Passage a synonym for barbaric horror. Over time, many of these individuals were re-exported to other slave owning colonies, either in the West Indies or to North America. However, and this is especially true for the seventeenth and early eighteenth centuries, the high mortality rate among slaves working on the sugar plantations necessitated a constant input of fresh slaves in order to maintain a work force.

This article was taken from the archives of the BBC and written by Professor Karl Watson.

Please note that not all answers to questions will be found in the body of this article. Research will have to be done to answer some of the questions.