As the African Heritage Foundation (AHF) prepares to host the commemoration of “The Battle of Adwa”, Nyabinghi groundation/ises(praises), we continue to share with you some history pertaining to that event.

In far to many instances the contribution of our sisters are not recognized, and honoured as they should in our historical narratives. Thus the history of “The Battle of Adwa” must never be told, without inputting the role Empress Taytu played in that war.

The article being shared with you from the Kentake Page.

Taytu Betul was a formidable queen and empress of Ethiopia (1889–1913). She was the wife of Emperor Menelek II, and was also the inspiration behind the 1896 Ethiopian victory against colonialism, in the battle of Adwa. She founded Addis Ababa, Ethiopia’s capital city.

Taytu Betul was born in or around 1851, the third of four children in an aristocratic Ethiopian family that was related to the Solomonic dynasty. Her father, Ras Betul Haile Maryam, was of the ruling family of Semien province, claiming descent from Emperor Susenyos I. Taytu’s mother Yewubdar was from a minor noble family of Gondar. Empress Taytu had the reputation of being fiercely proud of her lineage in Yejju, Semien and Begemder.

Empress Taytu had a comprehensive education and was fluent in Ge’ez, the classical Ethiopian language. She was married to Emperor Menelik II in 1883 in a full communion church service and thus fully canonical and insoluble, which Menelik had not had with either of his previous wives (whom he had divorced). Their marriage created strong political alliances.

Empress Taytu is acknowledged to have wielded considerable political power as the wife of Menelik, both before and after they were crowned Emperor and Empress in 1889. Menelik, who often prevaricated and postponed unpleasant decisions with answering “Yes, tomorrow” (“Ishi, nega”), found it useful to have his wife be in a powerful enough position to say “Absolutely not” (“Imbi”) to people and issues he just didn’t want to personally offend or refuse. As a result, Empress Taytu was increasingly unpopular while Menelik remained very loved by one and all at court and beyond.

According to royal historians, the Emperor always consulted her prior to making important decisions. Hence, Empress Taytu was a key player in the conflict over the Treaty of Wuchale with Italy, which she tore up. In the Italian version of the treaty, Italy made Ethiopia an Italian protectorate, while the Amharic version did not do so. The Amharic version recognized the sovereignty of Ethiopia and its relationship with Italy as just a diplomatic partnership. The moment that discrepancy was discovered, Empress Taytu was the first to agitate the hesitant Emperor and other men to stand up for liberty, dignity and against Italian aggression.

When Italy invaded the Empire from its Eritrean colony, she marched north with the Emperor and the Imperial Army, commanding a force of cannoneers at the historic Battle of Adwa which resulted in a humiliating defeat for Italy in March, 1896. She bravely fought in the frontline, motivating any man that wanted to retreat. She also mobilized women, both as fighters and nurses of wounded soldiers. Her deeds at a critical moment in Ethiopian history not only saved Ethiopia from European colonization, but it also paved the way for the decolonization of Africa. 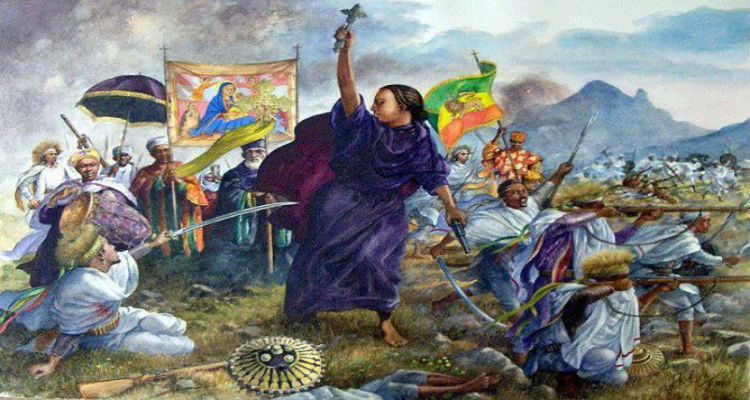 European papers of her time praised Empress Taytu, comparing her with Joan of Arc, Cleopatra, and other famous women in history. 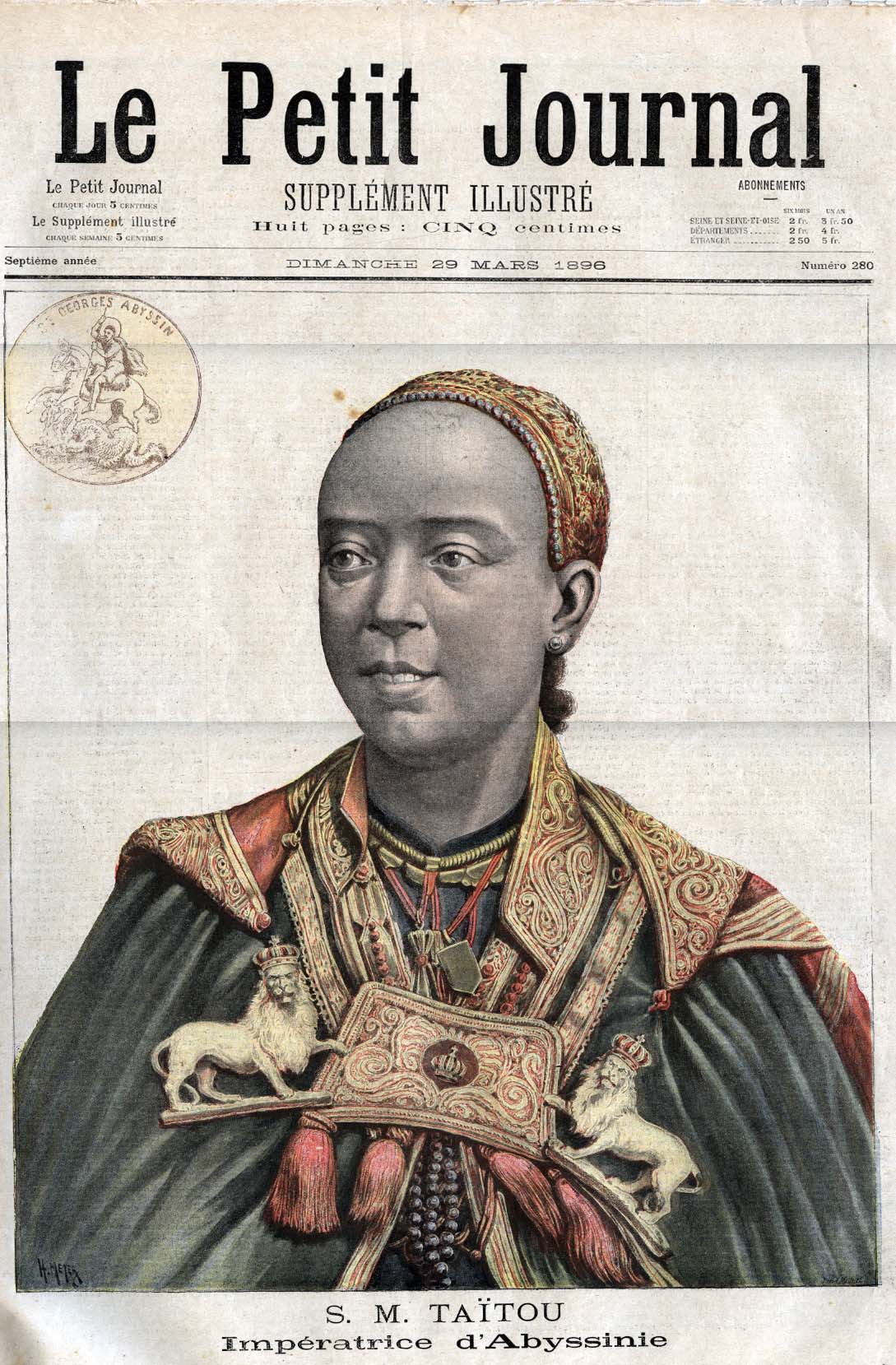 When Emperor Menelik’s health began to decline around 1906, Empress Taytu began to make decisions on his behalf, angering her rivals for power through her appointment of favorites and relatives to most of the positions of power and influence. Widely resented for her alleged nepotism, the nobility of Shoa and Tigray, along with the Wollo relatives of the heir-to-the-throne, Lij Iyasu, conspired to remove her from state responsibility. In 1910, she was forced from power, and a regency under Ras Tessema Nadew took over. Instructed to limit herself to the care of her stricken husband, Empress Taytu faded from the political scene. Emperor Menelik died in 1913 and was succeeded by his grandson from a daughter of a previous liaison, Lij Iyasu. Empress Taytu was banished to the old Palace at Entoto, next to the St. Mary’s church she had founded years before, and where her husband had been crowned Emperor. 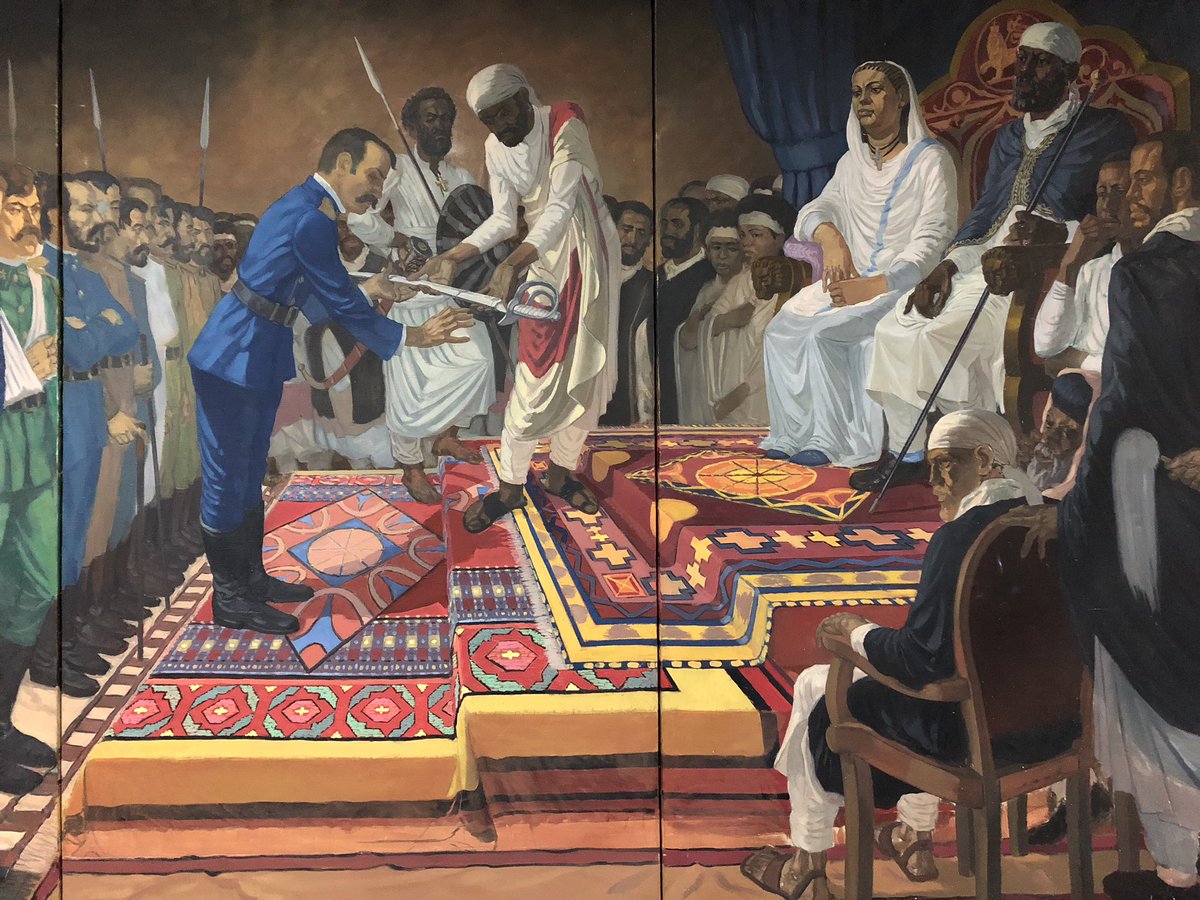 Some believe that Empress Taytu may have played a part in the plot that eventually removed Emperor Iyasu V from the throne in 1916, replacing him with Empress Zauditu. Empress Zauditu, Menelik II’s daughter by yet another previous marriage, had always been close to Empress Taytu and invited Empress Taytu to live with her. Although Empress Taytu declined she resumed advising rulers. Empress Taytu lived out the next few years at the old palace next to the Entoto Maryam Church overlooking Addis Ababa. She requested permission to go to Gondar in November 1917 to end her days, but was refused; three months later she was dead. She died on February 11, 1918 and was buried next to her husband at the Taeka Negest Ba’eta Le Mariam Monastery in Addis Ababa.

NYABINGHI GROUNDATION/ISES TO COMMEMORATE THE BATTLE OF ADWA.

All are asked to bring fruit, nuts, ital/vegetarian foods.