During the decades of the 20th century, many favorable conclusions with respect to the status of marijuana have been compiled as investigations and analyses were undertaken by reputable bodies of powerful countries. In the USA, the First Report of the National Commission on Marijuana and Drug Abuse (1972:14) in the section, “Marijuana: A Signal of Mis-understanding “ records that from as early as 1914, the Harrison Act had incorrectly classified marijuana as a narcotic drug in its statutory provisions. This has been replicated in scientific literature. The Report stated that the herb that was used by Mexican immigrants and West Indian sailors in the ‘gulf states’ should not have been confused with Asiatic opium smoking. It added that the infamous Harry Anslinger, who had been instrumental in supporting the American government in their passing of the 1937 Marijuana Act, eventually denied that marijuana use led to harder drugs/substances.

The insistence by the DEA that marijuana remain a Schedule 1 drug similar to heroin and cocaine exemplifies the same mind-set of those of the early 20th century. It must be exposed that the notion of classism and racism obtained in the years leading up to the dubious classification of cannabis in the 1937 as being a “dangerous drug“ and the ultimate criminalization of its users. In fact, much of the stigmatization and intolerance associated with its use stemmed from upper class hostility to an unfamiliar lower working class indulgence of the herb.

The unquestionable consensus arising from scientific research by a wide cross section of studies, done especially on the Third World over the last century, conclusively reaffirm the herb’s margin of safety. These studies systematically refute on scientific grounds all
the major charges made against the herb over the years, such as: the stepping stone theory, a-motivational symptoms, fetal abnormalities, hormonal deficiencies, decline in fertility, loss of co-ordination of motor functions and impairment of memory.”

Studies include Bourhill (1913 Africa), Walton (1938 Mexico), Chopra and Chopra (1957 India), Comitas and Rubin (1975 Jamaica), Carte (1976 Costa Rica), Hamid (1980 Trinidad), Comitas (1980 Greece) and Grimspoon (1993 North America). As Ernest L. Abel summarizes in his informative text, Marijuana, the First Twelve Thousand Years,“the middle-class perception of marijuana as evil has persisted over the centuries…Only after the sons and daughters of prominent middle-class parents had been arrested and branded as criminals, and in many cases sentenced to long terms in prison, only after it became apparent that marijuana was no longer a minority –group problem, only after fear and panic about marijuana’s alleged dangers began to dissipate in the light of evidence to the contrary from their
own sons and daughters, only when the erstwhile marijuana users become the nation’s lawmakers- only then did attitudes and laws about marijuana change”.

He concludes “whatever marijuana’s past, its future will inevitably be that of decriminalization and eventual legalization, subject no doubt to the same regulatory
measures as those that apply to alcohol…If the past is any example, instability, lack of progress, and immorality will or will not occur regardless of whatever happens where marijuana is concerned.” When debate and research has been undertaken of cannabis, Western scholarship, in trying to come to terms with probable decriminalization or legalization, has usually adopted various categories, namely: legal, economic, environmental, sociological, religious, sacramental, ethno-botanical, medicinal, recreational, industrial etc.

FRAMING MISCHIEF BY A LAW

Law has been the instrument by which the interest of the coercive order has been enforced in this part of the ‘Third World’. The following are but a few of the laws that were passed internationally and locally which can be cited to substantiate this claim.

 1493 Papal Bull “Inter Caetera” which sanctioned Portuguese and Spanish
genocide of the people of Africa and the Americas.

 1833 Slavery Abolition Act provided compensation to former slave owners for
loss of their property and required the newly freed persons to work for 4 – 6
years on the plantation to make up the short-fall on the £20 million received by
the planters.

 1897 Barbados Vagrancy Act Cap.156 passed by the colonial government on the
basis of the UK’s 1824 Vagrancy Act.

 1929-12 Amendment Act revised definitions of the Dangerous Drugs Act 1926-7
and amended the procedure for dealing with drugs in transit.

(The above three are in the Report for Barbados communicated by the Government
of the United Kingdom at the League of Nation, January 28, 1937)

 1972 the Single Convention’s amending Protocol
The dates of prohibition and subsequent ‘reinforcement’ bear a sinister congruence with
significant dates in the region. It is tempting to associate the latter two geopolitically
with the Caribbean’s labour protests of the 1930s and the first and second decades of the
region’s political independence and development. It is more sobering to contemplate
the trend of coercive laws that has continued to be imposed by black leaders upon their
faithful electorate. The Prohibited and Unlawful Societies and Associations Act 1974
(the Dread Act) in Dominica placed a select group of citizens outside the protection of
the nation’s laws.
Ichirouganaim Council for the Advancement of Rastafari (ICAR) Sept. 22-23, 2016 Page 12
Barbados

 1997 Narcotic Drugs Shiprider
Marijuana Prohibition criminalized a large segment of the population and has spawned
a global enterprise proliferating illegal gun possession throughout the Caribbean.
RastafarI asserts that it is mischief to criminalize a certain section of the population. It is
wrong to warehouse the fruit of black women’s wombs in prisons. It is wrong to
implement policies that create the negative conditions that have led to increasing
violence among young and not-so-young men throughout our communities. It is
mischief to want to change the law, thereby admitting failure of national policy, with no
recompense given to citizens that the laws have failed. 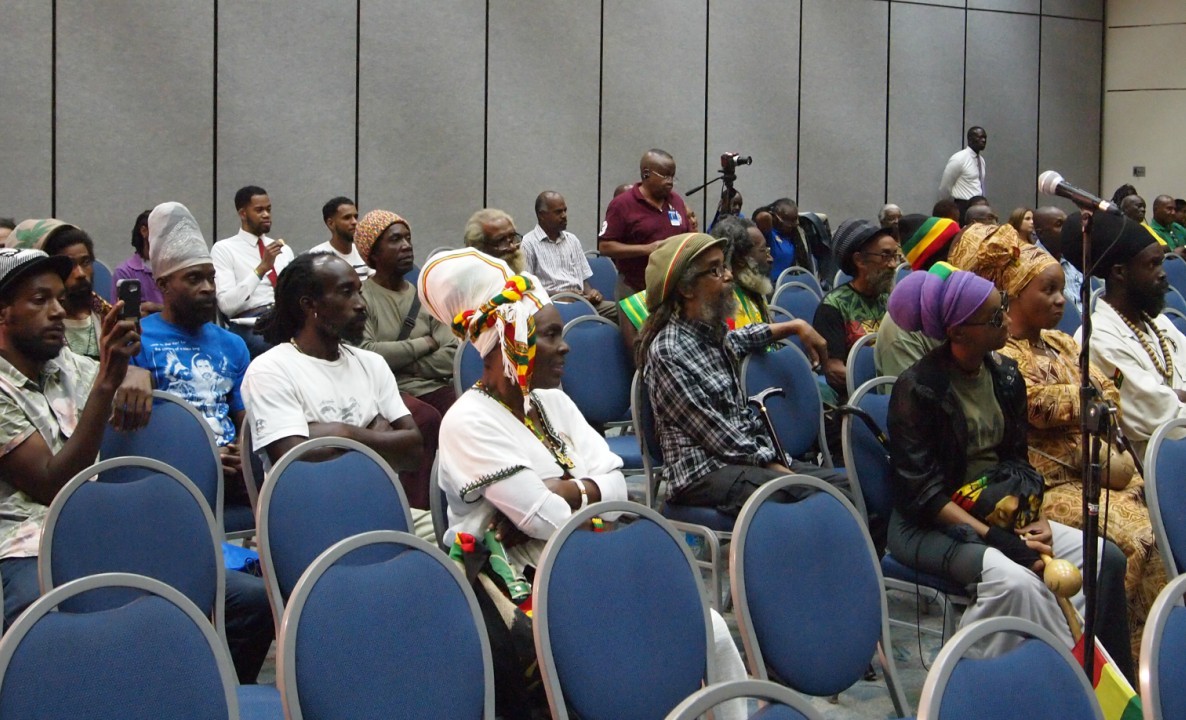 RastafarI declares that it is exploitative for some institutions of society to now be
positioning to benefit from marijuana by framing their economic self-interest as medical
marijuana. These same powerful forces, having in their possession research from
regional institutions, have remained silent while the lives of many poor black youth and
their families have been destroyed due to the existence of the marijuana prohibition law
and its biased application. Self-interested public relations only magnify the wrong. Any
changes in the legal and social management of marijuana must address this injustice
and make restitution to affected families.

Submission of the Ichirouganaim Council for the Advancement of
RastafarI on Sub-theme #1:
Geopolitics of Marijuana Prohibition and Marginalization of Interest Groups