We go to Dessie

After We had made the dispositions for the northern and southern armies, it was Our duty to defend Our country’s independence in the midst of Our troops. We therefore directed that Our guard of honour (the Imperial guard) should depart in advance, under their commanding officer Qagnazmatch Makuriya Bantirgu, as well as the army group called Mahal Safari, under the command of Ligaba Tassaw. We Ourselves set out from Addis Ababa on 18th Hedar 1928 (= 28 November 1935) and travelled to Dessie. Our main purpose was to stay at Dessie as rearguard for the advance corps until the remote border regions were mobilized on the strength of the mobilization decree We had previously issued.

After We had reached Dessie, the Italians thought of lulling us into a false sense of security and, therefore, waited for about a week before coming over in their planes. Even prior to setting out from Addis Ababa We had instructed Our armies to do everything necessary in the way of precautions against aeroplanes, and they had consequently begun to observe these precautionary measures by digging the ground in their various camps and by constructing shelters. Later on, on Friday morning 26th Hedar (= 6th December), 21 aeroplanes suddenly arrived and began to rain bombs on us. We at once transmitted orders that Our troops should quickly enter their shelter, for We were anxious lest they be exterminated for lack of defence. We Ourselves got hold of an Oerlikon anti-aircraft gun and began to fire. But as the planes were flying very high, it was impossible to hit any on that day. 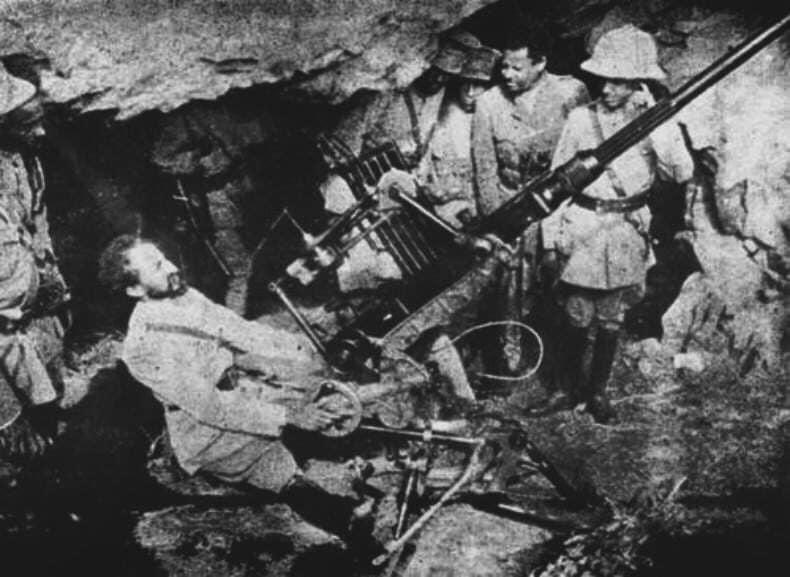 Considering the size and quantity of the bombs they dropped, it was scarcely believable that any human beings survived at Dessie. But the majority of the bombs they dropped failed to explode, and therefore the number of those who died was only about 20 and of those who were injured about 100. Further, some 50 thatched houses were set on fire, but on this day they did not cause much other damage. Moreover, the bombs which fell upon various churches, apart from just rolling down, did very little damage, and all the people were amazed. Subsequently the planes began to come, at times in a regular turn, at other times again only on every third day. On one occasion, however, on Ter 7th (= 16th January 1936), one large war plane turned up, and as we were watching and expecting it to drop bombs, at first smoke was seen to emanate from it and, subsequently, the plane caught fire. Those inside it came down by parachute, but as they landed on a precipice, they were all found to be dead. The aeroplane itself was burnt out.

While We were at Dessie, the British Minister at Addis Ababa, Sir Sidney Barton, and the French Minister, M. Bodard, presented to Our Foreign Minister, Blattengeta Heruy, the proposals which Laval and Hoare had put forward for the purpose of conciliation, declaring: ‘We have been instructed by our governments to show and to present these proposals to the Ethiopian Government; if the Ethiopian Government so desires it may accept them, but this is not a matter of compulsion.’ Blattengeta Heruy transmitted them to Us by telegram on the same day. The plan by Mr. Hoare and M. Laval was as follows: (a) Tigre: the region of Eastern Tigre is to be ceded to Italy; in the South it is to be delimited approximately by the Geba river; in the west by a line running from north to south and passing between Aksum (to be assigned to Ethiopia) and Adwa (to go to the Italian side).

(b) As regards the rectification of the border between the Dankali country and Eritrea: to be defined by a line which leaves Aussa and southern Eritrean parts to Ethiopia to provide for necessary access to the sea.

(c) Rectification of the border between Ogaden and Italian Somaliland: Starting from the triangle, at which the frontiers of the three countries (Ethiopia, Kenya, and Italian Somaliland) meet, the new Ethiopian-Italian frontier is to be as follows: In the main it is to take a north-easterly direction, cutting the Webi Shebeli and passing towards Iddidole; leaving Gorrahei to the east and Warandab to the west, and joining the border of British Somaliland at a meeting point on the 45th meridian.

The rights which the British Somaliland tribes possess to use the pastures and waters, within the territories to be assigned to Italy under this delimitation, are to be safeguarded.

(d) Ethiopia will obtain an outlet to the sea with full rights of sovereignty. This access to the sea shall be arranged, at a place to which Italy will agree, on the Assab coast, together with territory that affords access to the port and goes down in a narrow strip adjacent to the frontier of French Somaliland.

The United Kingdom and French governments will endeavour to obtain a pledge regarding Ethiopia’s fulfilment of her obligations in the matter of the traffic of slaves and arms, incumbent upon them, and applicable in the territory which Ethiopia is to acquire.

Within the territory here delimited, which would have severed the greater part of Ethiopia, Italy would obtain exclusive economic rights; and the administration in that territory would be undertaken by a company or some other kind of organization. To this company would be assigned the rights of ownership over unoccupied territories (subject to the rights of natives and foreign citizens there), the monopoly of exploiting minerals, forest, and kindred matters. This organization would be obliged to contribute aid to the country’s economic structure. From its income it would have to give a proportion to the welfare of the native population, in a manner which is essentially of a social character.

The control of the Ethiopian administration within the enclosed zone would be exercised, under the Emperor’s sovereignty, in accordance with the scheme of the services of assistance granted by the League of Nations. The Emperor had already previously accepted this as extending over the whole Abyssinian territory. Within these services, however, and under the direct control exercised by a principal adviser, Italy would possess a preponderant influence. The said principal adviser may possess Italian nationality and will be an assistant, as regards the affairs in question, to the Chief Adviser selected by the League of Nations to help the Emperor. The Chief Adviser is [not]* to be a subject of any of the powers bordering on Ethiopia. It is incumbent upon the employees of the scheme of assistance, in the capital city as well as throughout the reserved zone, to regard it as essential that the life of Italian subjects and the free development of their initiatives be safeguarded.

The United Kingdom and French governments will willingly endeavour to ensure that this organization, whose terms of reference are to be established by the League of Nations, will protect Italian interests in this region in full.’

After We had examined these proposals of Mr. Hoare and M. Laval, We were resolved not to surrender to Italy, of Our own free will, Our country which had remained free for over 3000 years, unless the League of Nations compelled us to accept such a judgement; We therefore had the following protest communicated to the League of Nations through Our Minister in Paris:

‘Is it in conformity with the covenant that the government which is in breach of the covenant should be requested by the League: “Please accept, together with executive control, the major part of the attacked party’s territory as well as the remaining part-under cover of the League of Nations”? While it is the unshakable truth that it is the enemy’s wish to destroy completely the party that has been attacked-as the General Council well knows-is the country which has fulfilled the charter and which is the victim of wrongdoing to be asked by the League to abandon her defence against the powerful enemy who is opposed to her right of freedom and self-government and, for the sake of world peace, to agree to accept her attacker? Is the attacked country to abandon hope of finding a saviour and to nurse the fear of betrayal by the League, thinking that it will really desert us? This matter which is the main problem for future international relations among peoples, whatever their appearance, their race, or their power may be-ought it not, first of all, to come up before the League and to be examined openly with full freedom and before the eyes of the whole world?’