Our journey from Koram to the warfront at Maytchaw

While We were at Koram, enemy aircraft would come over daily, making repeated turns to and fro, from two to nine o’clock (= 8 a.m. to 3 p.m.), dropping many bombs and much poison gas and causing harm to Our army. The army officers who had taken the offensive on the Tambien front had fought there with valour and discharged their duty; in the end they were defeated by superiority of bombs and weapons and had dispersed; We then sent for them to join Us. They reached Koram on 10th Magabit (= 19th March, 1936) at eight o’clock at night (= 2 a.m.) and were reunited with Us. While the principals were H.H. Ras Kassa Haylu and H.H. Ras Seyum Mangasha, with them were Dejazmatch Mangasha Yelma, Dejazmatch Wand Bawassan Kassa, Dejazmatch Abara Kassa, Tsahafe Te’ezaz Afawarq, Bajerond Latyebalu Gabre, Qagnazmatch Dahne Walda Maryam, Fitawrari Zawdu Abba Koran, and other officers.

On Thursday, 11th Magabit (= 20th March 1936), We heard that the Italians had passed Amba Alage and were encamped at Maytchaw; We decided, therefore, to take the guard of honour which had been waiting with Us as rearguard, as well as the army which had returned from the front, and to go to fight, with Ourselves as leader. We thus set out from Koram at two o’clock in the evening (= 8 p.m.) and proceeded towards the war front at Hayo. As the night was dark, We directed the army to prepare torches and we marched by torch-light. And since the road was narrow, the march took many hours.

Having marched in this fashion, we spent the day of Magabit 12th (= 21st March) at a place, a little beyond Lake Ashange, which was suitable for protection against aeroplanes; and marching again that night we reached the district called Hayo (Aya). On this day enemy aircraft dropped many bombs and were spraying yperite poison that was flowing like water; thus the terrible death that came upon man and beast was most distressing.

The day of 13th Magabit (= 22nd March) We spent encamped at Hayo (Aya) upon an arid amba, a place that was suitable for observation of aircraft. At two o’clock in the evening (= 8 p.m.) We assembled all the army officers and chiefs and explained to them Our plan as regards the battle tactics and the order of muster. After this We directed them, on their part, to express their views in what manner the waging of the battle might be improved. The great officers present on this occasion were H.H. Ras Kassa, H.H. Ras Seyum, Ras Getatchaw, Dejazmatch Wandirad, Dejazmatch Walda Ammanu’el, Dejazmatch Adafersaw, Ligaba Tassaw, Fitawrari Ashanafi as well as other captains and army officers who served under them. The officers consulted and then presented to Us the following unanimous opinion:

‘Death is an inheritance that cannot fail to come to all of us. God has assigned to us the day, and if we are victorious, then we shall have saved our independence; and if we die, then it will be for our country, for our death will be reckoned as martyrdom. It is a great good fortune to die having struggled with the enemy. Making the approach to battle overnight, let us meet the enemy at dawn.’

After We had listened to their speech, We said to them: ‘Whether We die or live, it is for Our country; all We are concerned about is lest Our country should die.’ We then informed them that we would be marching towards the war front to Ba’tawayo.

We spent the day of Magabit 14th (= 23rd March) on that arid amba of Hayo (Aya). On this day the chiefs of Tchartchar came with rifles and ammunition which they had received from the Italians and expressed to Us the following sentiments of loyalty: ‘It is because the Italians had told us “your king is not there” that our hearts were divided; but now that we have seen you with our own eyes, we shall die fighting for our country’s freedom with the arms we received from the enemy.’ And We warned them, saying: ‘Do realize that the lies which the enemy is telling you are apt to destroy you and your country!’

When it was twelve o’clock (= 6 p.m.) on this day We departed from the barren amba and, marching through the night, We camped at the Ba’tawayo cave. This place is vis-a-vis the Italian encampment.

When We were at Ba’tawayo on 15th Magabit (= 24th March), enemy aircraft spent the day going to and fro and dropping many bombs. At six o’clock (= 12 noon) a large aeroplane arrived and, flying low over the place where We were, dropped bombs. From Our side a machine-gun volley was fired and it was hit and set on fire; emitting smoke it fell beyond the Dubbar pass. The Italian radio confirmed that the plane was burnt together with its crew of four.

We stayed at Ba’tawayo preparing military plans from the 16th to the 19th Magabit (= 25th to 28th March). On these days enemy aircraft went to and fro in great numbers and dropped bombs and poison gas; every day, as a result of Our soldiers’ fire, these planes were seen to be burning and to emit smoke, going towards the Tchartchar lowland. On 19th Magabit in particular one of the aircraft that had come over was hit by an Oerlikon gun and came down near there; after that many aircraft arrived dropping bombs and poison, and as a result many people were killed and injured. 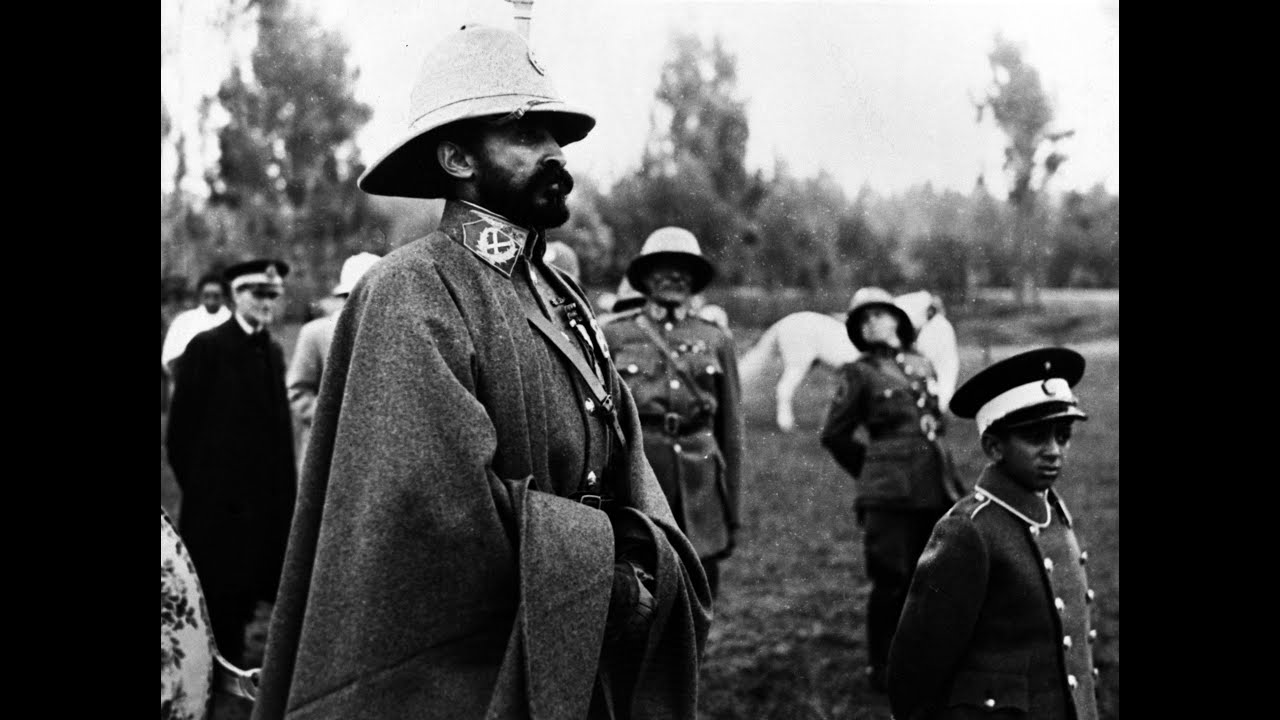 On Saturday, 19th Magabit (= 28th March), We summoned the army commanders and gave them the following guide-lines:

‘It is necessary to be resolute and to eschew vengeance even when going to hunt a wild beast-let alone for this present decisive great battle against our enemy. Young men facing war, you have seen that God has condemned any irresolute soldier in the past, for it is worthless doing things only on instructions and orders fearing that God will condemn one-rather than doing one’s duty whole-heartedly.

If one flees, not having acted resolutely, there is only death. Fight fiercely, lest the freedom of your country of Ethiopia and its flag should be obliterated and torn to shreds, for it is to him who acts decisively and intrepidly that God extends his help. If you break the oath, death is surely bound to occur; do not die having ruined the honour of your soul and your body.

To claim: “my officer has fled or has died; I have to carry an injured body” is not really motivated by compassion for the injured but to fabricate a refuge for his frightened heart. When an officer dies, is not a soldier who has been fighting bravely to become an officer?

If God favours us, do not hasten to quarrel over property, for Ethiopia’s existence is our property and wealth. If you find a foreigner, a wounded prisoner, do not finish him off with the dagger, pistol or explosives in his hand, except if he tries to harm you, for having him as a prisoner may help us to find out the enemy’s secrets.

If a servant gets separated from his master, troops from their commander, this means the beginning of flight, so recognize it as the enemy of myself and of Ethiopia.