As calls for the removal of Lord Horatio Nelson go up, Euro/British – Descended Barbados is speaking up in the defense of their hero.

One such defender is a man called Roger Gibbs. In a public post on facebook recently, he gave his rationale for why Nelson should remain.

I am going to share my thoughts as I go through the article with you. My thoughts will be in RED, a fitting colour for this critique of Mr. Gibbs post. 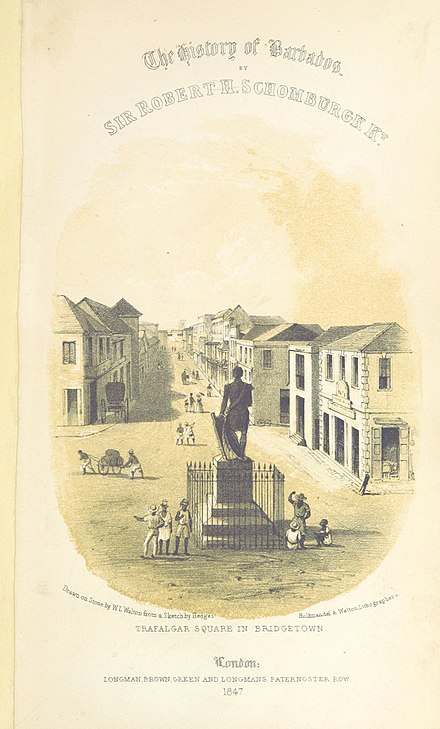 The story of Barbados and its people is etched in the landscape of its capital Bridgetown.

What does this mean? Bridgetown was the auction place for African descended people who were being sold into slavery. It housed the ‘CAGE’, where I think the statue of Nelson presently stands and not Hero’s Square. I stand to be corrected on that point; I do think when previous calls had come from Afro-descended Barbadians to move Nelson out of Hero’s Square, a moving of the boundary line between the two occurred. As it may be, is Mr. Gibbs saying that the story of Barbados is etched in slavery, and as such Nelson should retain his place due to his championing of the slave trade?

The current debate over the appropriateness of having a 19th century British admiral/war hero located in the central core of the City is very timely. Public debate about this and a host of other social justice and national identity issues is critical.

He is correct here when he says a British War hero. It is always timely to remove symbols of injustice and inhumanity. Such debates are critical, hence this article.

For starters, I fully support the immediate dismantling of all forms of racism. It’s an outdated, vile concept no modern mind can tolerate. It has caused untold suffering and continues to stalk our daily lives like a sinister mad hatter.

No argument from me here.

In this regard I feel torn because I also believe deeply in the power of heritage assets to provoke historical curiosity and be a powerful tool to educate us about who we are, where we came from, understand and appreciate the experiences of our ancestors and define our values by giving us an unvarnished look at the past.

Although I am not torn in an form or fashion on the removal of Lord Nelson, I do feel he is etched in our history, and as such should be situated somewhere relevant to the man, that does not offend the the sensibilities of the Afro-descend Barbadians who would still be in shackles and chains if Nelson could have had his way. Mr. Gibbs must understand that Nelson is no ancestor of Afro-descended people and he in no way defines our values. If he is your hero, and defines your values, and those of your children then put him somewhere relevant to your people. Maybe Mr. Gibbs wants Nelson there as a reminder to Afro-descended Barbadians who is the economic power of the island and how that was and is maintained? After all he stands in front the parliament building, at the head of the main street of the capital of the island.

Lord Nelson’ statue at the top of Broad St. is one of those significant assets. Erected even before the one in London, his ominous presence is a symbol of Barbados’ deep ties with Britain, its distinctive Bajan English language, religious practices, legal and education system, sports, and many other traits and practices we have inherited from the Empire we helped build from a medium-sized European power to a world-dominating superpower.

Obviously the we he is speaking of is not Afro-descended Barbados. If Mr. Gibbs thinks that brute forced labour is a proud contributor to the building of the British empire, then he is completely as racist and as his ancestors who put him there in the first place. Maybe Mr. Gibbs is unaware that we never wanted your religion, your language, your education , sports etc. Those things were forced on us at the expense of our own culture and history. Mr. Gibbs seems to think that Africans were savages and the White man their saviour. What do I care about the British empire as an Afro-descended person?

Horatio Nelson, a dyed-in-the-wool military man is known for his exceptional bravery and his decisive victory over the French menace. Now there he stands, accused of being a slaver (not true), a murderer (he killed nuff people but that was his job as law enforcer in a violent and lawless time), a defender of slavery (indirectly) and worst of all, a racist (his views on race match those of 90% of his generation).

What has Lord Nelson’s naval military skills have to do with me? That is British business. No one is accusing Nelson of being a slave trader, the fact is he defended it in principle and openly fought those who were at the time fighting for the abolition of slavery. The fact that he was a racist among racist made it ok? Mr. Gibbs says 90% of that generation was racist and probably deep down that has been handed down, but that means 10% understood racism was wrong and inhuman. Is does not seem Mr. Gibbs is descended from that 10%.

Flashing forward to 1966, when Barbados became independent, he is more of a guest, a relic of the British Crown, an institution revered by the British public and royal aficianados globally.

1966, yes, 1966, the year we did the In – De- Pen -Dance. Afro- descended people wanted to lift their necks from under the boot of colonial rule. Mr. Gibbs says Nelson became a guest and that he was and still is judging by the tone of his article. An institution revered by British public and royal Africinados globally, wow, really, White people all over the world revere the man Nelson? I wonder if Germans all over the world revere Hitler?

Today, Barbados has one of the strongest legal cases against Britain for reparations for slavery and its corrupt dissolution – millions paid to the slave owners and nada to the victims.

This may be true, but what has that got to do with Nelson’s removal? The removal of that statue is part and parcel of our intended reparation package. Don’t think Mr. Gibbs that money is all that reparations is about. It is about the reclaiming of ourselves, of our dignity, and no dignified person would want to have a man such as Lord Nelson stand as a symbol of his oppression as it does presently.

I do not feel it makes sense to remove HRH Elizabeth Windsor’s symbolic representative during these important negotiations, which will take some years to resolve, as be resolved justice demands. There is NO shame in being the victims of slavery. Shaming the victim of rape and violence is reprehensible. Shame the perpetrator.

All are entitled to their opinions, but be mindful that these opinions paint the character of the man. We are not ashamed of being a slave, we are angry that another supposed human could do such a thing to another. It is a crime against humanity. It was the act of devils. Do I want the devil’s defender standing over me in such manner? No! The taking down of Nelosn is not the act of a people ashamed Mr. Gibbs, we are pissed. The perpetrator will be shamed and in the shaming will come the toppling of Nelson and such representations of the monsters and their queen who enslaved us. To hell with Queen Elizabeth and her heirs. Nelson must fall and so too the Governor General’s office. The queen may be your head Mr. Gibbs, but she is not mine.

Lord Nelson is a sort of hostage in our negotiations, prime evidence that supports our case. Do not hide him away. Leave him there.

Hostage???????? What the hell…….. Nelson is the victim now? Trying to turn my oppressor into the victim, and the victim the oppressor is pure unadulterated wickedness. Something an old racist would do, your culture and heritage have effectively been handed down to you Mr. Gibbs. Bravo! We are fighting for ours to be handed down to us. He does not need to be hidden, he needs to be situated in a place where you and your tourist friends can see. He belongs with our shackles, chains and other tools of African oppression in a museum. Get some of your people to put money and build a Nelson museum somewhere else. He is yours, you take him. Bussa is mine and I want him nearer to me, in Hero’s Square or in the Cage where he can lead the rebellion.

He is a central character in the narrative of Bridgetown; he is an important asset in telling the story of this UNESCO-designated city-port that once played a leading role in the history of the modern world. Bridgetown was a crime scene, the place where the defendant schemed to create a damnable legal document in the 1660s that codified the sub-human treatment and exploitation of Black people, a document that was used to roll out the heinour project across the Anglo-Caribbean and beyond. Case pending.

Exactly why he should be in a museum with the correct narrative being told of him. Don’t try to turn a sinner into a saint, because he worked for the devil.

I take a knee to beg my Black Bajan brothers and sister, who have every right in this moment of soul searching and atonement to chuck him in the effing Careenage, to consider the path of forgiveness and think of the value of dialogue.

Forgiveness is not forgetfulness, and we are fully aware of the residue of Nelson manifested in White privilege in all the forms it takes today. You are still oppressing me and you want forgiveness? You don’t even want to move your symbol of oppression, and you want forgiveness. Your religion teaches forgiveness and repentance comes hand in hand. Are White Barbadians ready to repent? No, you all are too busy recreating your business of slavery under the guise of tourism, with the help of some house Negroes who govern your empowerment and our oppression.

Think of the wisdom of leveraging this asset in a more strategic manner for real systemic change in the international political and economic relationships which govern our lives. Tek down Nelson?? No, please. He got some talking and explaining to do first.

The wisdom of leveraging this ‘asset’ in a more strategic way is neither here nor there for conscious Afro-descended Barbadians. Tek down Nelson????? Yes, please, right away if not sooner. He have talked and the explanation is etched in history. If you want to talk, let us talk about how you can repair some of the damage your ancestors did to my ancestors, and what your people are doing to my people all now.

Please share this with others, so that we may all understand where White Barbados wants us to be, what White-privilege is, what they think of us, and why we must represent our freedoms as men and women befitting the title HUMAN.