Winnie Mandela has passed away at the age of 81 on Easter Monday. As one of the most vociferous fighters of apartheid, South Africa has lost a living piece of its history.

Her Khoza name ‘Nomzamo’ translates to ‘she who tries’. Her activism and struggle for justice came at great personal costs, but her sacrifice made one of South Africa’s most important freedom fighters.

“She refused to be bowed by the imprisonment of her husband, the perpetual harassment of her family by security forces, detentions, bannings and banishment. Her courageous defiance was deeply inspirational to me, and to generations of activists.”

“The overwhelming majority of women accept the patriarchy and protect it. Traditionally, the violated wife offloads her aggression onto the daughter-in-law. Men dominate women through the agency of women themselves.”

“It was in the townships where we shed so much blood. Nothing could have been achieved without the sacrifice of the people. Black people.”

“I believe something is very wrong with the history of our country, and how we have messed up the African National Congress.”

“There is nothing the apartheid government has not done to me. There isn’t any pain I haven’t known.”

“I’m not sorry. I will never be sorry. I would do everything I did again if I had to. Everything.” 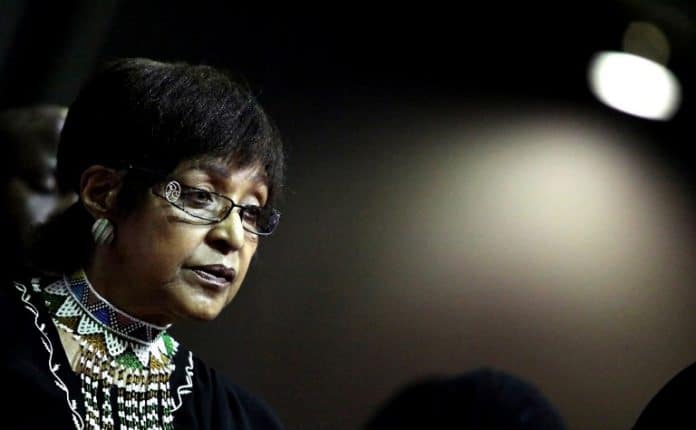 “I am the product of the masses of my country and the product of my enemy.” – In response to an interviewer who asked why she had not dropped the Mandela surname after their divorce in 1996

“The years of imprisonment hardened me … Perhaps if you have been given a moment to hold back and wait for the next blow, your emotions wouldn’t be blunted as they have been in my case. When it happens every day of your life, when that pain becomes a way of life, I no longer have the emotion of fear… there is no longer anything I can fear. There is nothing the government has not done to me. There isn’t any pain I haven’t known.” – 1987 interview, cited in Lives of Courage.

“Together, hand in hand, with that stick of matches, with our necklace, we shall liberate this country.” – From a speech at Munsieville outside Johannesburg in 1986.

“You’re running around f*ck*ng at the slightest emotional excuse. The fact that I haven’t been speaking to Tata [Nelson Mandela] for five months now over you is no longer your concern. I keep telling you the situation is deteriorating at home. You are not bothered because you are satisfying yourself every night with a woman. I won’t be your bloody fool, Dali.” – Reported excerpt from a letter to her former lover, Dali Mpofu, quoted in The Sunday Times and Sunday Star in 1992.

“I cannot forgive him[Nelson Mandela] for accepting the  Nobel Peace Prize with his jailer De Klerk. Hand in hand they went, Do you think De Klerk released him from the goodness of his heart? He had to. The times dictated it, the world had changed.” –  From an interview with journalist Nadira Naipaul in 2010.

“Mandela let us down, he agreed to bad deals for black people. The economy is very much ‘white’. He prefers to sip tea with the Queen, the biggest oppressor of black people, and have dinner with the Clintons.” –  Interview with Naipaul in 2010.