I think it would be prudent of us to examine what has happened to the first country to legalize cannabis as we (Cannabis Barbados) continue to bring cannabis facts to you. Is Uruguay suffering from their decision to legalize? What lessons can Barbados learn from Uruguay as it pertains to cannabis legaliztion.

It’s been more than two years since marijuana was legalized in Uruguay. What can be observed?

Home-growing is working, though mostly in a grey area. This is because there’s a government database where those who want to legally have plants at home need to register, and most of the home-growers don’t want to.

The government states that the register is for your own protection, but it’s hard to blame home-growers for being skeptics after decades of state persecution; especially when the actual president, Tabaré Vázquez, played with the idea of using the database to “rehabilitate” users.

Police harassment has also been a problem. Until recently, law enforcement agents had no idea what to do. For instance, they didn’t know if they should seize plants or not, or if they could ask for proof of registration. Although there was quite a lot of confusion, it seems it was corrected. It’s also understandable that these changes need some time.

In any case, I personally saw home-growing everywhere. It wasn’t uncommon before legalization, but now the number of grow-shops skyrocketed. Last month I attended the massive 2015 Uruguayan Expocannabis, and it was heavily focused on home-growing. 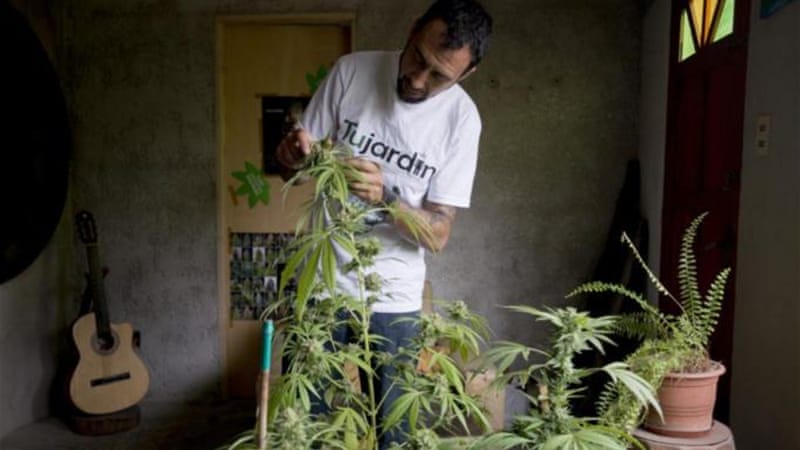 Belong to a club

The cannabis clubs are also working in a somewhat grey area. There are about 20 of them growing plants in Uruguay, but only a handful finished all the legal paperwork.

In any case, it’s good that there’s an alternative for those who don’t want to grow cannabis at home nor buy it in the black-market. For a sign-up fee and monthly fee determined by each club, members can have their weekly quota of cannabis. Of course, the clubs are non-profit organizations, and the only way to have access to their cannabis is to become a member.

The number of members, plants, and cannabis grams you can receive is limited. The price per gram also tends to end up being much higher than black-market prices, but the product is expected to be much better than what you can find in the street. The big failure until now is the so-called “government cannabis.” It has been delayed many times during the past two years. Government officials repeat they are working without any haste in order to do it right, but Uruguayans are getting anxious.

The new president isn’t as enthusiastic about cannabis legalization as the one before, so there’s no reason to believe the implementation is going to be any quicker now.

Two companies, finally, recently obtained the permit to grow cannabis under strict government regulations and controls. Hopefully one day in 2016, cannabis is going to be sold in pharmacies all across the country.

The major problem with the government is that they are regulating each tiny step of the production and selling process, even fixing the price, and when the government fixes the price the whole production ends up being over-regulated and inefficient.

The most eye-popping result from Uruguay’s legal marijuana market has been the plunge in crime. Drug-related crime has dropped 20 percent in the country since marijuana became legal in 2017, according to Latin American news service Telesur.

But there are issues. Telesur reports that the government has had to crack down on locals selling to tourists. While marijuana is legal for Uruguay citizens, that right does not extend to those visiting the country.

The law allows for residents to grow six plants at home. They can also buy cannabis from a local pharmacy or create cannabis clubs. Members of the clubs, with a maximum membership of 45 people, can withdraw 40 grams per month of marijuana from the club’s cannabis crop. All of this requires registration with the government.

Also, in Uruguay it is permissible to use marijuana in public. Eduardo Blasina, director of the Cannabis Museum in the nation’s capital, Montevideo, told The Guardian that the law gives Uruguay residents access to “certified, unadulterated marijuana.” He also said the law has ended Uruguay’s participation in South America’s war on drugs.

He said that war “has been absurd, with catastrophic results no matter which indicators you consider, including consumption.” He said legalization in Uruguay could open the door to other countries that are beleaguered by drug trafficking, such as Colombia and Mexico, to follow their lead and make marijuana legal.

The arrest that started it all.

There has long been a strong advocacy for legal marijuana in Uruguay, a country that prides itself on openness and liberal laws. But it all reached a head with the 2011 arrest of Alicia Castilla, a 66-year-old author and intellectual who was growing cannabis in her home.

Her arrest ignited huge protests and eventually led to laws that allowed some cultivation of cannabis at home. That, in turn, paved the way for the nationwide legalization that happened in 2017. The case against Castilla was also dismissed last year.

Castilla said during her arrest she was treated like “the female version of Pablo Escobar,” she told the Guardian. Now, she is free to grow plants in her home.

However, some still have concerns that the law didn’t go far enough to legalize marijuana. They dislike the provision that requires cannabis buyers to register with the government, according to The Guardian. They fear it stigmatizes marijuana users by forcing them to register unlike, for example, those who drink alcohol.

Still, Uruguay is far ahead of the rest of the world on marijuana legalization, and certainly it’s leaders have a different attitude toward the issue than many in the U.S. How legalization plays out there — and if that crime rate drop holds — will be something both marijuana advocates and opponents will watch in the coming months.